I have missed the last several days of posts due to server problems...yes, I know it got fixed but then a truck in Seattle shut down the whole Olympic Peninsula and part of Oregon for internet and phone all day on Thursday...and waiting in doctor offices for test results on my husband's heart problem....which boiled down to we've ruled out organic, it's electrical...go to a cardiologist. Sigh....


Day 7, Thursday in Calgary was a day to hee-haw and get "white-hatted" and honor  given to the couple with lovely white stetson hats. Prince William and Kate oversaw the opening of the Calgary Stampede riding in on a chuck wago 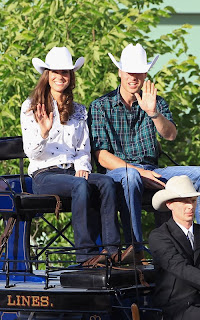 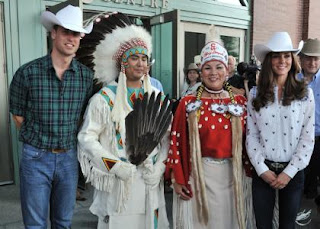 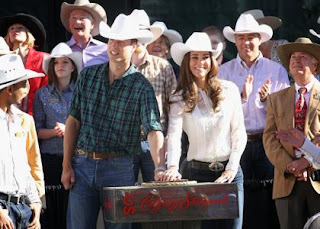 with William helping to hold a bull during the bull riding competition and generally having a great time.


Prime Minister Stephen Harper gave William & Kate a gift from the Canadian government later of  the creation in their honour of the Parks Canada Youth Ambassadors Program, which will see two young Canadians chosen every summer to travel the country visiting national parks and historic sites.


William and Kate then flew to LA in red, white and blue. Kate wore the diamond maple leaf when they left, but had changed when they arrived in Los Angeles. 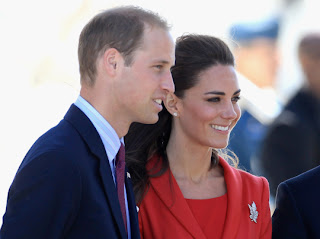 William and Kate attended a cocktail party at the British Consul General's residence in Hancock Park where they are staying for their 3 day visit, with a surprise visit of friend David Beckham who delivered signed LA Galaxy team shirts for a future fund raising auction William is having, with Catherine having changed into a green Diane Von Furstenburg dress.. 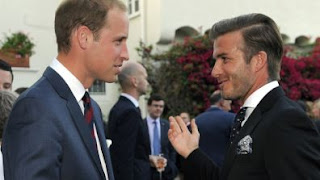 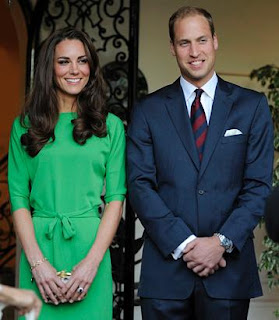 
Today, Saturday, Prince William is playing in a charity polo match in Santa Barbara that will be cateder by Giada de Laurentis who said in the Orange County Register and her website that she is serving California Cuisine with an Italian twist. The menu for that is  Here's the menu, according to E! Online:

First up is pea pesto crostini, featuring pureed peas on toast, topped with half a cherry tomato. If William and Kate are typical Brits, they'll adore those peas cooked to a mushy frazzle.
Next, there's a California chopped salad with a mix of grilled lettuces, grilled corn, grilled shrimp, zucchini and crispy tortillas in a light lemon dressing.
The main course is chicken Milanese, which features breaded chicken cutlets in a creamy tomato fennel sauce.
She has posted the recipe for the Pea Pesto Costini on her website: http://www.giadadelaurentiis.com/

Don't Miss Giada On The Today Show, Monday July 11!!
Here is one of my faves that I will be serving at the Royal Polo Match on July 9th!
foundationpolochallenge.com

For the pea pesto, pulse together the peas, garlic, Parmesan cheese and salt and pepper in a food processor. With the machine running, slowly add in the olive oil until well-combined, about 1 to 2 minutes. Season with salt and pepper, to taste. Transfer to a small bowl and set aside.

For the crostini: Preheat a stovetop griddle or grill pan on medium-high heat. Brush both sides of the sliced bread with olive oil and grill until golden, about 1 to 2 minutes.

Transfer the bread to a clean surface and spread 1 to 2 tablespoons of the prepared pesto on each slice. Top with tomato and serve.

*Cook’s note: If you don’t have day-old bread on hand, you can dry out fresh bread by putting the slices in the oven at 300 degrees F until slightly crisp, about 5 minutes.

with a BAFTA, or British Academy Of Film And Television Arts event which will include members of the Downton Abbey cast. Whew!


Have a great weekend. It's sunny and we were at the Farmer's market this morning. Lovely!
Posted by Antiques And Teacups at 12:00 PM

Email ThisBlogThis!Share to TwitterShare to FacebookShare to Pinterest
Labels: 1902 state landau, canadian visit, Giada, polo, will and kate in USA, william and kate