JULY SIZZLE 10% Off sale for July

JULY SIZZLE 10% SALE
going on now at Antiques And Teacups.
Just use the coupon code SIZZLE for 10% off on all orders over $25.00 for the month of July
Let's get the party going!
http://www.antiquesandteacups.com

Posted by Antiques And Teacups at 12:41 PM No comments: Links to this post 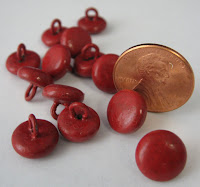 I love victoriana, items from the victorian age 1832-1901 during the reign of Queen Victoria in England. They are intriguing to us now, how women survived in that labor intensive era.
Most did not have servants to make things easy, but because advances of technology hadn't been developed yet, you just made the best of it.
These little gems are just such treasures of outmoded technology. Shoes, especially the fashionable high buttoned shoes and boots were fastened by a series of little buttons that had to be painstakingly buttoned by hand or used with button hooks. These little buttons were also used on gloves as well. Can you imagine the time...and back breaking work it took for most women just to put their shoes on??? Sheesh!!! I'm glad I was born in the 20th century rather than the 19th century! They measure between .25 inch in diameter and 3/8 inch in diameter.
Shoe buttons were made of many materials and had metal shanks. The better off financially you were, the more shoes you had to match your outfits. We acquired a button collection which includes hundreds of victorian shoe buttons which we will be listing in the next few months. I get bored working on the same sort of thing for too long! There are many different colors and styles....quite a fun collection.
Today (as then) shoe buttons can be used to create jewelry, decorate period clothing or for use by costumers or renactors or just as a curiosity of a bygone age. Cool.
Click here to go to the High Button Shoe Buttons category at Antiques And Teacups
Happy Monday...some clouds today, but in the high 60s. Have a great day. My DH has a birthday tomorrow, but don't know what he wants to do yet but a good day to celebrate someone you love.
Posted by Antiques And Teacups at 10:20 AM No comments: Links to this post 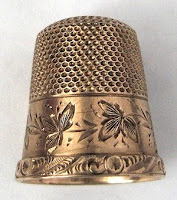 I love this thimble! Talk about the luxe life...imagine doing your mending or needlework with a solid 14 kt gold thimble! How cool is that!

The thimble came from England and has a lovely foliage design. I think it is just lovely! You can learn more about it at Antiques And Teacups or go straight to the listing for the 14kt solid gold thimble

Antique and vintage sewing collectibles have a great following. I found out the other day that button collecting is the third most popular American collecting area behind stamps and coins. I don't know where I've been, but I didn't know that. My father was a stamp collector and I grew up helping him with the sorting and mounting and was always fascinated by the colors, designs and countries.

One of my favorite pastimes as a young child was getting out the old English biscuit tin button box and constructing ornate layer cakes from the buttons. I think I'd better find that button box!

Other sewing collectibles include bobbins, wooden spools, scissors, sewing trims and vintage fabric yardage. A great way to recycle is using vintage/antique items in your decorating theme. I've seen a reappearance of the old 1950s bark cloth fabric lately which fits perfectly with retro, mid century revival decorating. And even the most minimalist decorating scheme can be softened with a few victorian touches for contrast!

Come visit us a Antiques And Teacups at www.antiquesandteacups.com we are currently featuring FREE SHIPPING on orders over $75.00.

Posted by Antiques And Teacups at 10:23 AM No comments: Links to this post