I am joining others above (and many others!) for Teacup Tuesday. I have chosen to share a Gladstone, England art deco design teacup because of the wonderful post by Terri at Artful Affirmations about her recent visit to the Gladstone Pottery Museum located near Stoke-on-Trent in England.  Every time we visit we go to a pottery and watch them work and Terri has some fab photos of the museum which will give you an idea of what goes or DID go into the process as most are closed now. 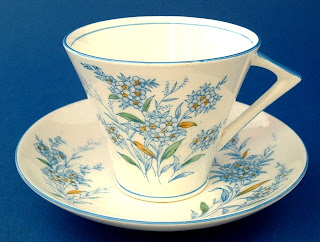 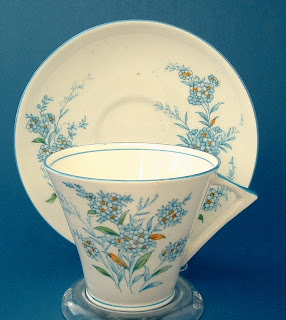 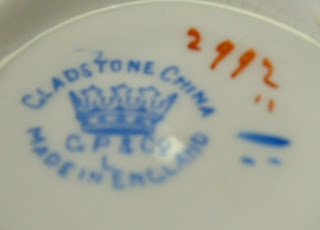 The photos aren't the best, as they are from 7 years and 2 cameras ago from my archives of items sold, but I especially wanted to share this teacup because it was by Gladstone in the 1930s and also and has the cool art deco design triangular handle made famous at the time by Shelley China in their Vogue or Mode shapes which were then widely copied. Cool! 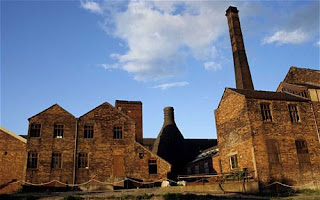 This is the last actual Victorian era WORKING pottery in the UK...thousands have closed unfortunately and those still in existence have moved most their work to the Far East. This is Burleigh Pottery, which started in the 1860s as Bugress & Leigh in Burslem, an are just outside of Stoke. Burleigh, which is a contraction of the 2 names came into use in the late 1920s. Their most famous wares are the Calico line which came in several colors, but blue has been the enduring favorite.
The firm became a part of Denby recently but the firm was having difficulties and were considering selling...and interest was expressed in tearing the historic pottery down. 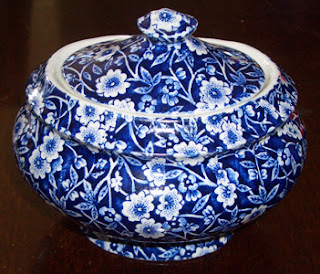 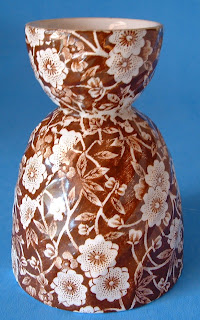 photos courtesy of my archives from Antiques And Teacups
On June 13, 2011, the Prince Charles' trust, the  Prince's Regeneration Trust announced that they had bought the pottery for 7.5 million pounds and is leasing it back to Denby so they can continue to make the Blue Calico pottery that has been made there since 1880, as well as build up a museum and working visitors centre for the Potteries district. I was thrilled and look forward to visiting when it's done.
Later this week I will be reporting on our Sequim Lavender Festival and Farm Faire Weekend and the afternoon tea we had at the George Washington Inn. Have a great time visiting everyone's teacup blogs for Teacup Tuesday!
Posted by Antiques And Teacups at 4:47 PM