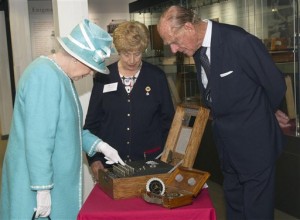 Today, Queen Elizabeth II and Prince Philip were at Bletchley Park, Milton Keynes, Buckinghamshire to unveil a memorial to the World War II codebreakers who worked here clandestinely and were credited with ending the war 2 years earlier and with the stopping loss of many more lives. 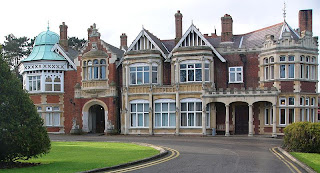 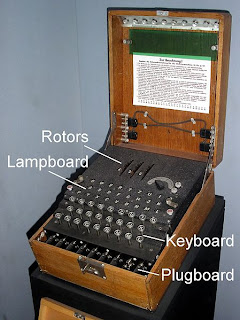 courtesy http://www.bletchleypark.org/
The Bletchley Park secret decoding work resulted in cracking the supposedly unbreakable German codes. The capture of an German Enigma machine resulted in the code being then worked on another Enigma and Colossus system which was the innovative precursor to today's super computer.


Here is a link to information on the various machines at the Bletchley Park website:
The Codebreaking Machines


I grew up with stories about the secret work done during the war as my father was part of the secret OSS or Office Of Strategic Services stationed in England. My father was the head of a traffic intercept station (read eavesdropping on enemy traffic, decoding & sending on to Whitehall) in the Berkshire village of  Hurley-on-Thames. He was in charge of the detail and lived at the Manor House in Hurley. I have a photo I took of it in 1990, but it was not with a digital camera, so can't post it.  I did find a photo of his local while there, The Olde Bell which is one of the oldest pubs in England. We visited the town and took photos for my dad and were able to show them to him just a week before he died unexpectedly. 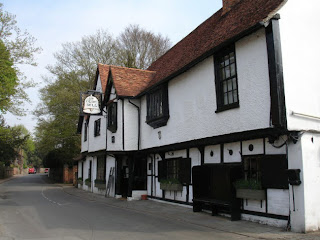 My father was unable to tell my mother where he was...it was just listed as...a village in England...but managed to let her know by referring conversationally to a book he had just read by Leslie Charteris in The Saint series that was popular in the 1940s. He referred to an incident in a book on a page that was set at The Olde Bell in Hurley so she figured out that was where he was.


Winston Churchill credited the work done at Bletchley Park with winning the war.


Account of the Queen's speech, related info of her visit can be found at:
http://www.bletchleypark.org/news/docview.rhtm/646969


Here is a video from the Daily Telegraph Online from the visit:

Posted by Antiques And Teacups at 1:31 PM