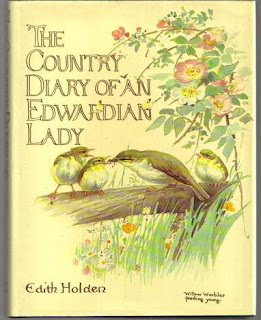 I haven't visited The Country Diary Of An Edwardian Lady by Edith Holden for while, so as it is now April, I thought I would. Pages 35-36 from the writer and illustrator's journal for 1906 in Warwickshire, England. 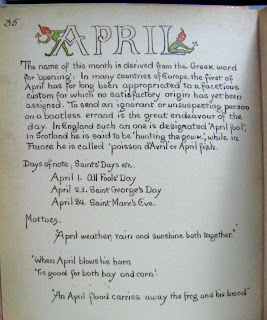 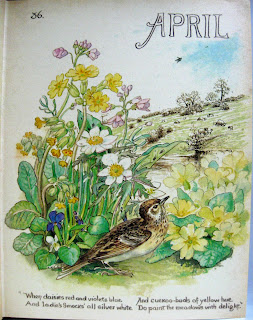 "The name of this month is derived from the Greek word for 'opening'. In many countries of Europe the first of April has long been appropriated to a facetious custom for which no satisfactory origin has yet been assigned.  To send an ignorant or unsuspecting person on a bootless errand is the great endeavour of the day. In England such an one is designated  'April Fool'; In Scotland he is said to be 'hunting the gowk'; while in France he is called 'poisson d'Avril" or April Fish."

Mottoes
"April weather; rain and shine both together."
"When April blows his horn
'Tis good for both hay and corn"
"An April flood carries away the frog and his brood"
"When daisies red and violets blue
And Ladie's Smocks all silver white
And cuckoo-buds of yellow hue
Do paint the meadows with delight."

I want to share the cutest Royal Worcester egg coddler I have at the moment at Antiques And Teacups. The pattern is called Skippety Tale and this is the king or double size. It was also available in the single size and I have even had it in the Maxime or very large size, although that is very rarely found
The illustrations are so cute!  I have a thing about hedgehogs anyway, so...
To see more about the Skippety Tale egg coddler at Antiques And Teacups, click on the photos below. 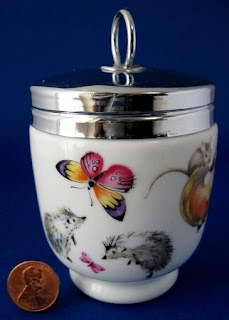 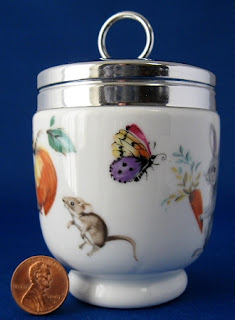 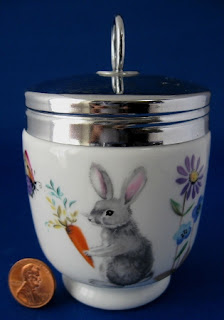 We are waiting again for our daughter in laws surgery. It was scheduled for last week but when they went in with a camera, they found the hole in her heart was slightly off from where they thought and was close to the arteries to her lung so it had to be approached differently. So they just took the camera out, bandaged that & sent he home for more MRIs and other tests and surgery should be this week, hopefully April 7th unless something else happens. Again, we would very much appreciate your prayer for this sweetheart. Please pray for Casey.
Thanks so much.
Posted by Antiques And Teacups at 9:45 PM