The sun is out and spring is indeed peeking out here...we have finally had our violets open below the pine tree in the front yard...a favorite sign of approaching spring...as the Daffodils and Tulips are just green leaves poking up so far... 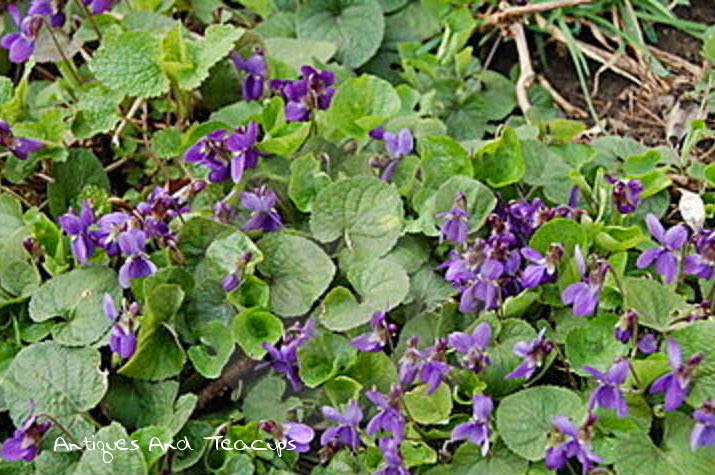 Violets stand for faithfulness in the Victorian Language Of The Flowers... 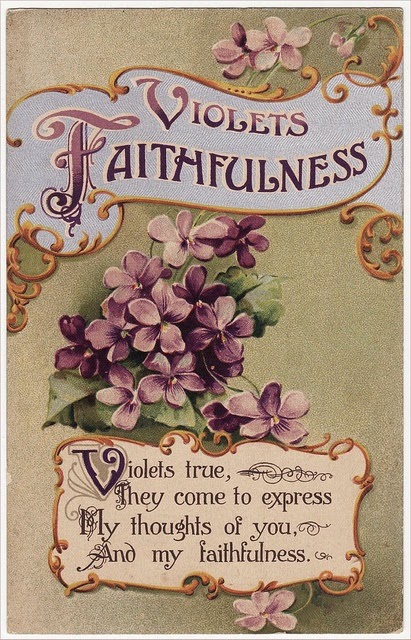 And so my choice of teacups for Tuesday Cuppa Tea today... 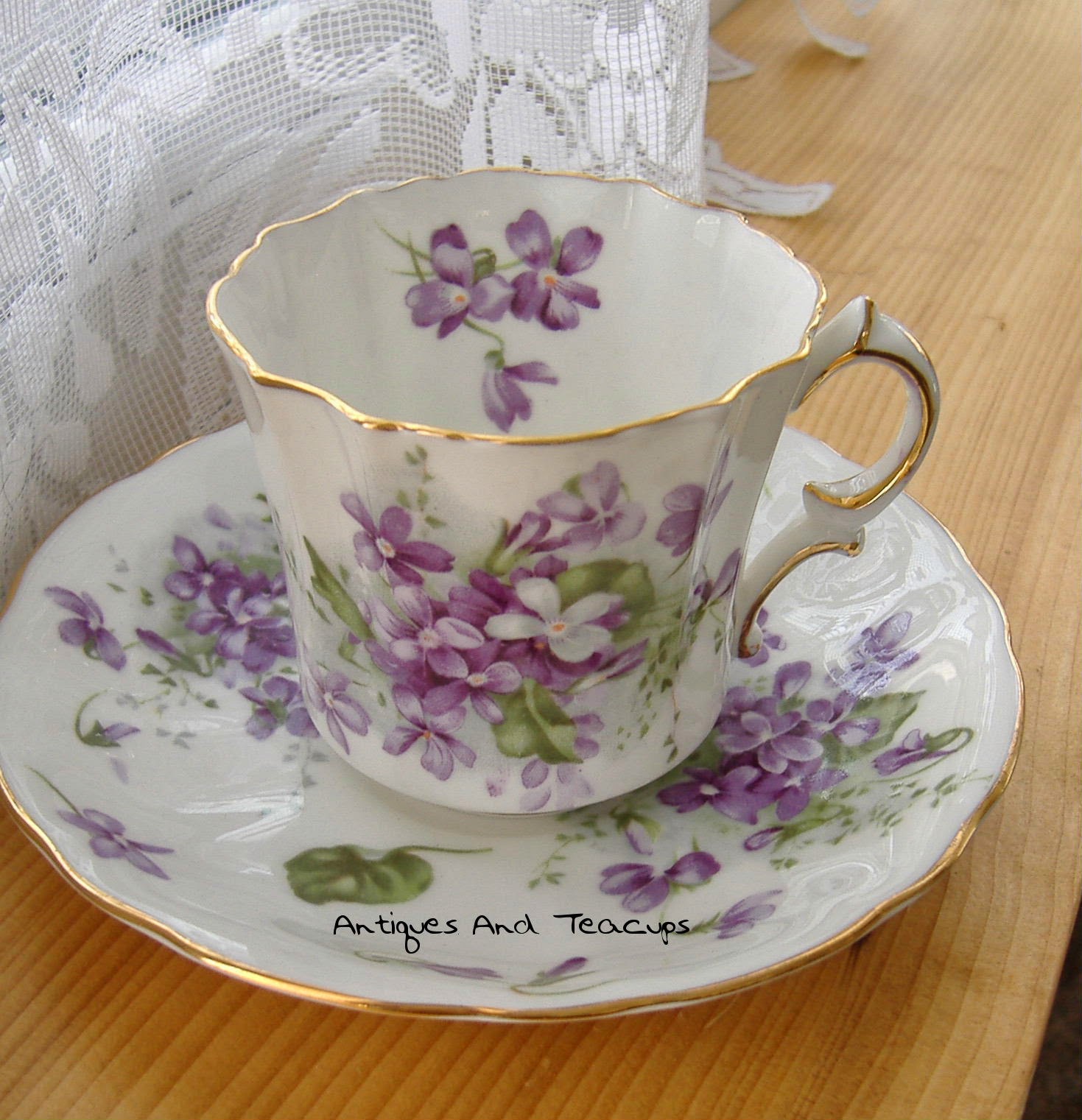 I found this Hammersley, England bone china Victorian Violets teacup from the 1930s and was thrilled. I love the delicacy of the Hammersley china... 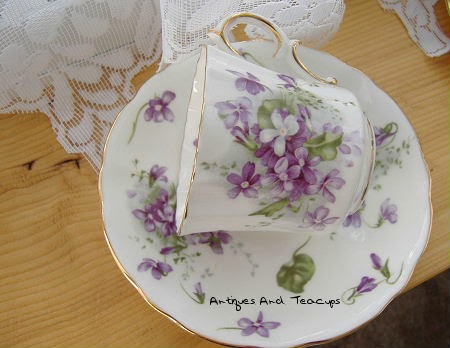 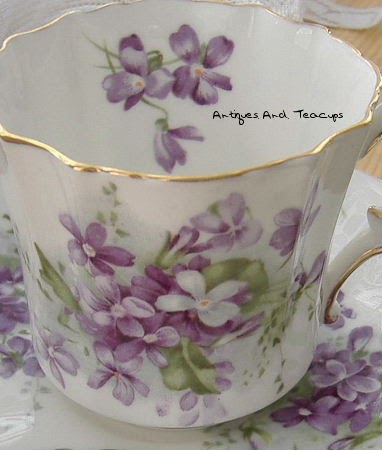 And I love the pretty shape and gold trim. I can almost smell the elusive scent... 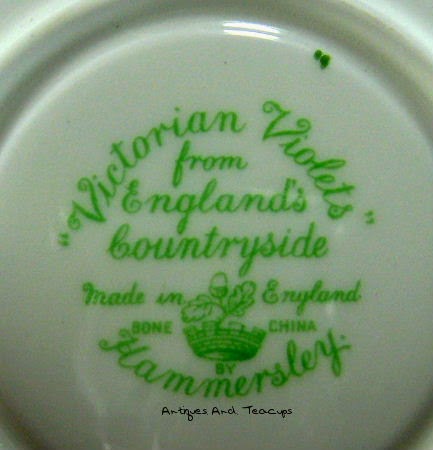 Teacup available at Antiques And Teacups...just click on the photos...

William Wordsworth, famous English poet who lived from 1770 to 1850 and spent years around the Lakes District in Dove Cottage wrote this...

The Lost Love
She dwelt among the untrodden ways
Beside the springs of Dove:
A maid whom there were none to praise
And very few to love.

A violet by a mossy stone
Half-hidden from the eye!
Fair as a star, when only one
Is shining in the sky.

She lived unknown, and few could know
When Lucy ceased to be;
But she is in her grave, and, oh,
The difference to me! 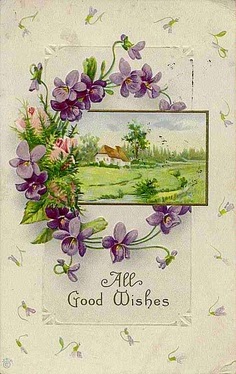 Changing directions, I posted last week an old photo I found of my aunt Ruth, whom I was named for on our 8 month trip to Europe when I was 20. I am beginning to sort through photos from boxes we moved here 7 years ago and haven't opened since. The 7th year is the Year Of Jubilee...so they are getting opened and set free! One of the fun things I found was photos of my husband's Coldstream Queen's Guards Regiment. 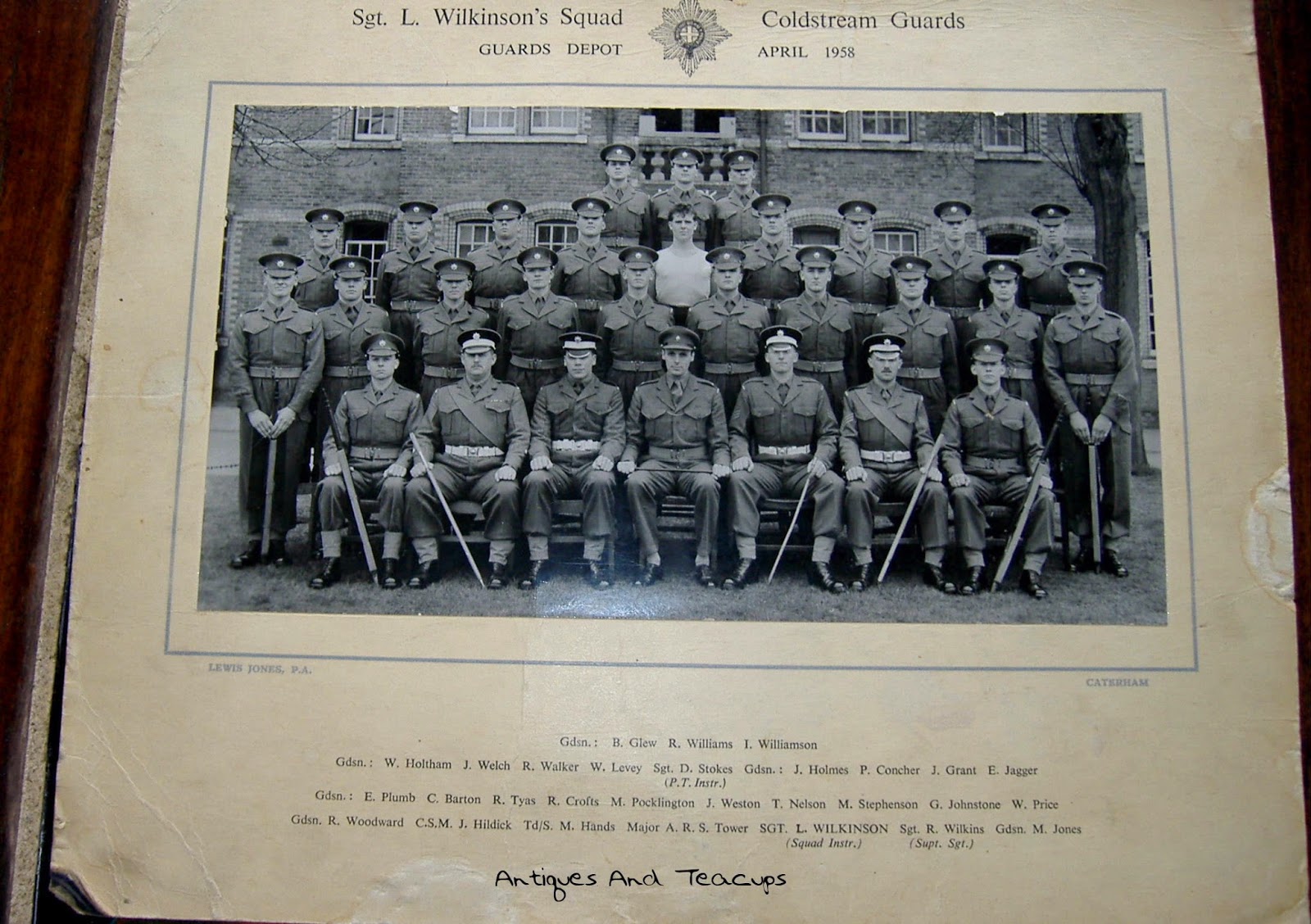 The Coldstream Guards, if you have followed my blog for long, are the guards in the bearskins that find the guard at Buckingham Palace and other Royal residences.  We didn't think we had any photos, but this one turned up of his old regiment when it finished it's training.... 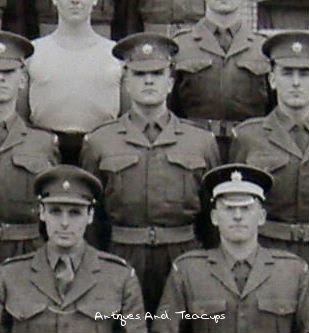 That's my honey in the middle at 22. When he emigrated to Canada and subsequently to the US where I met him, the photos were left with his Mom, and when she passed away, to his older sister who brought this with her when she came on a visit years ago. 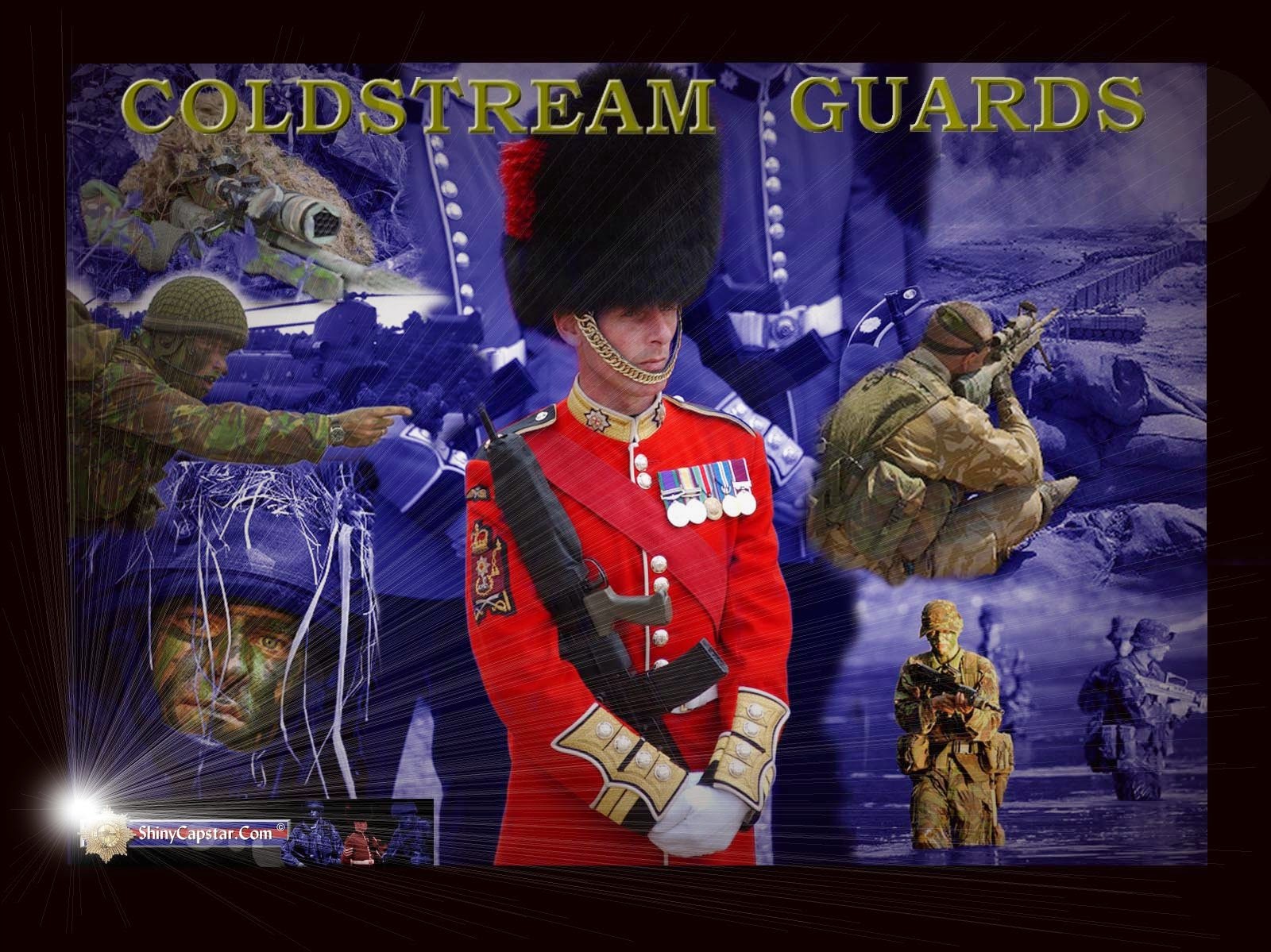 What we don't have, is a photo of him in his red dress tunic and bearskin shako...sigh... 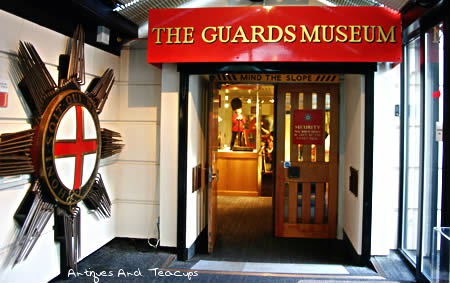 I took this photo at the Guards Museum in Green Park, just a few blocks from Buckingham Palace...where a brother Coldstream Guard was on sentry duty. There are 5 Guard units in the Brigade Of Guards, among whom the Coldstream Guards is one unit. 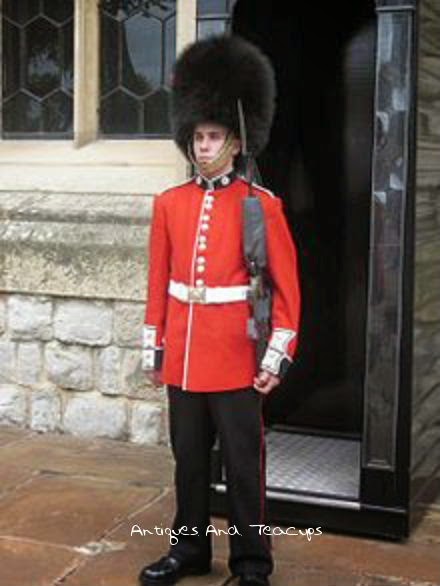 The Guards do much more than ceremonial guard duty, and are actually a crack infantry regiment. My husband's unit spent 8 months in Duselldorff, Germany during the Suez Canal crisis in the 1950s, although it ended before he was deployed to the Gulf. Coldstreamers...or Chilly Rivers, as they are affectionately called...have served in Iraq and Afghanistan. 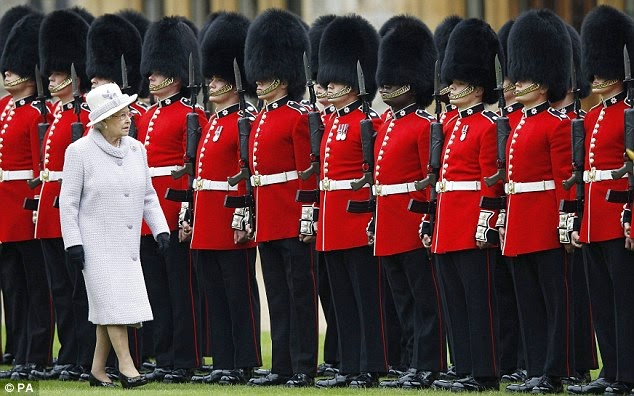 This is a photo of Queen Elizabeth II reviewing the Coldstream Guards unit... 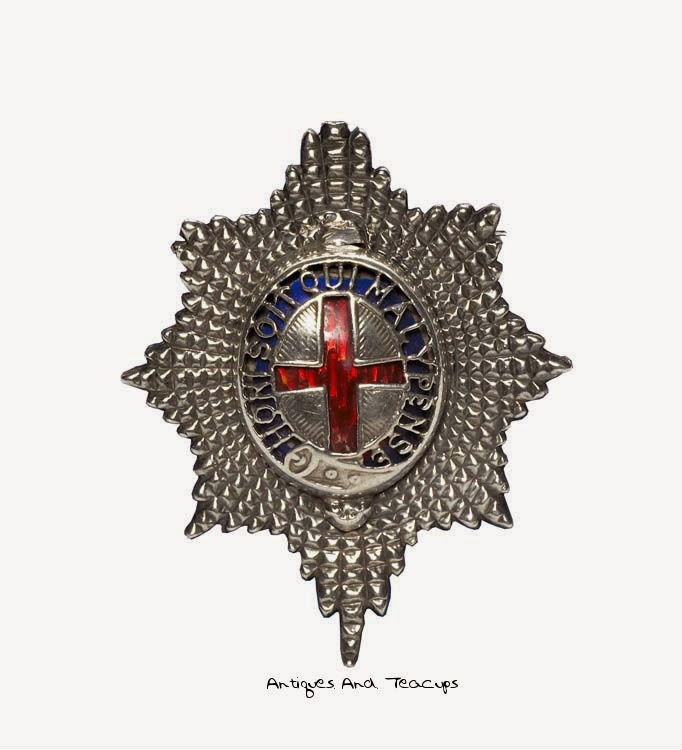 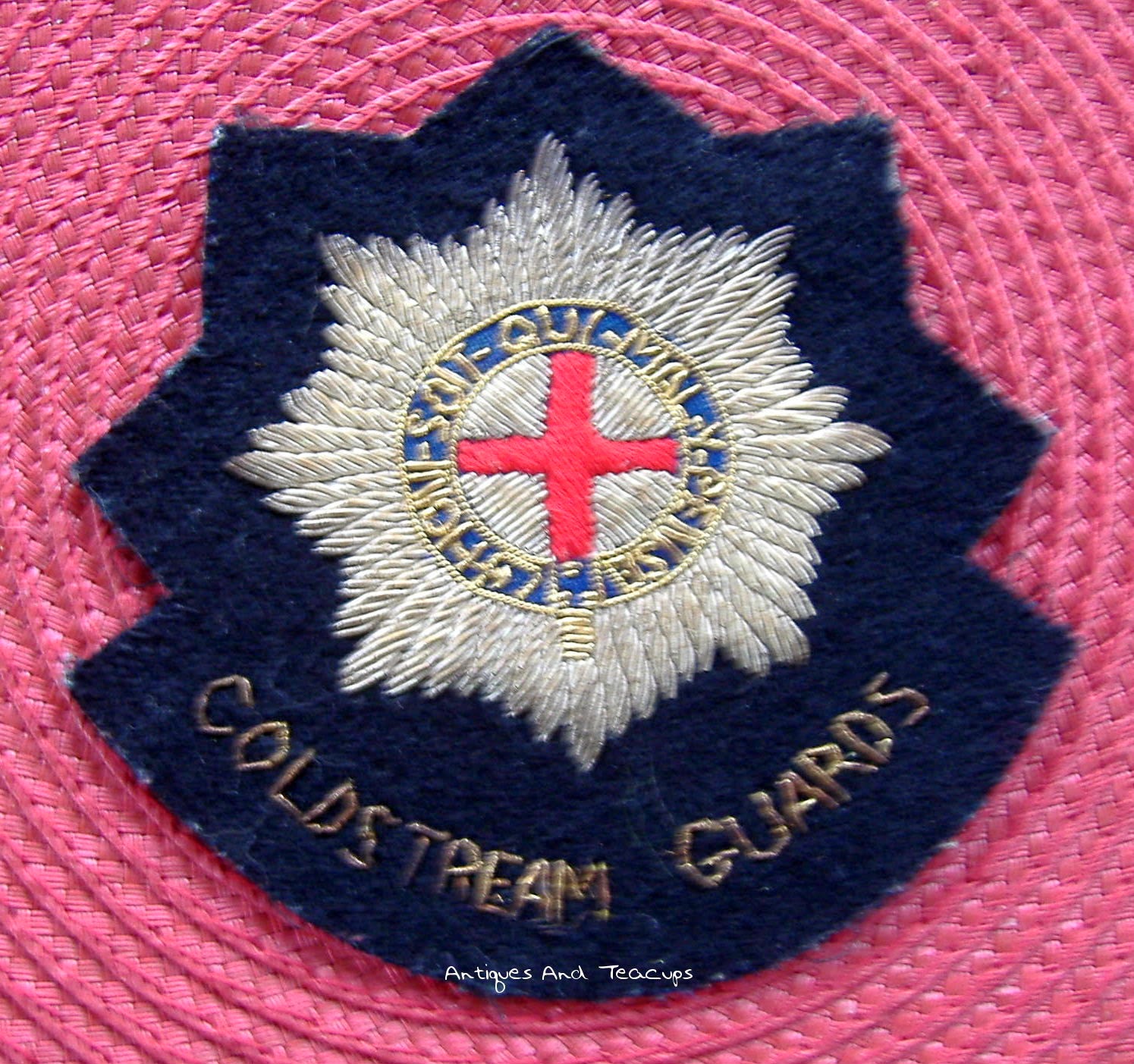 This is his cap badge and uniform patch. The gold and silver threads of the patch have tarnished, but the sunlight made them bright again!  So we at least have some momentos! 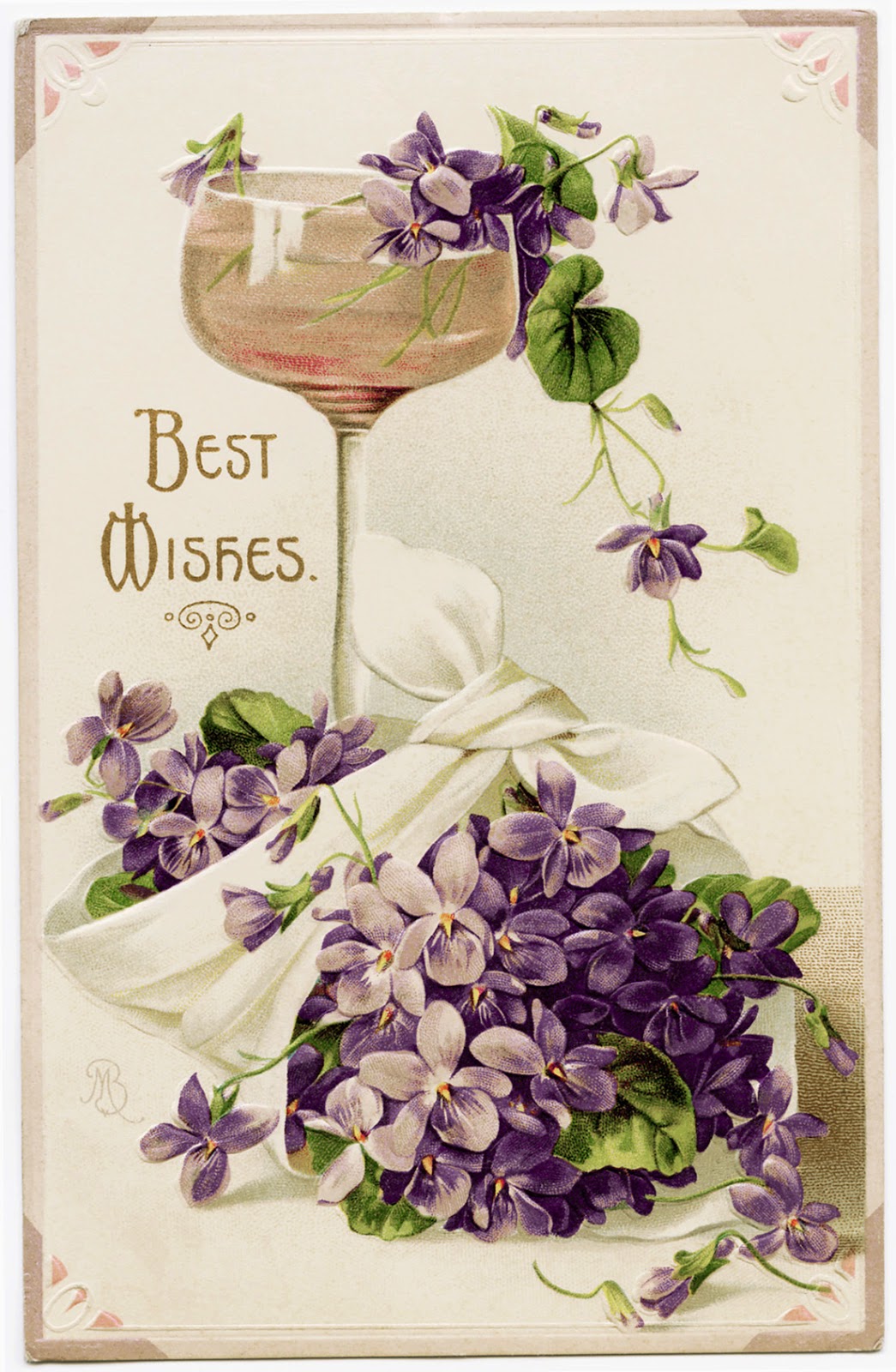 So I hope you are enjoying spring, and the spring cleaning it fosters, as new life pushes forth and new growth follows. May you grow in Grace! 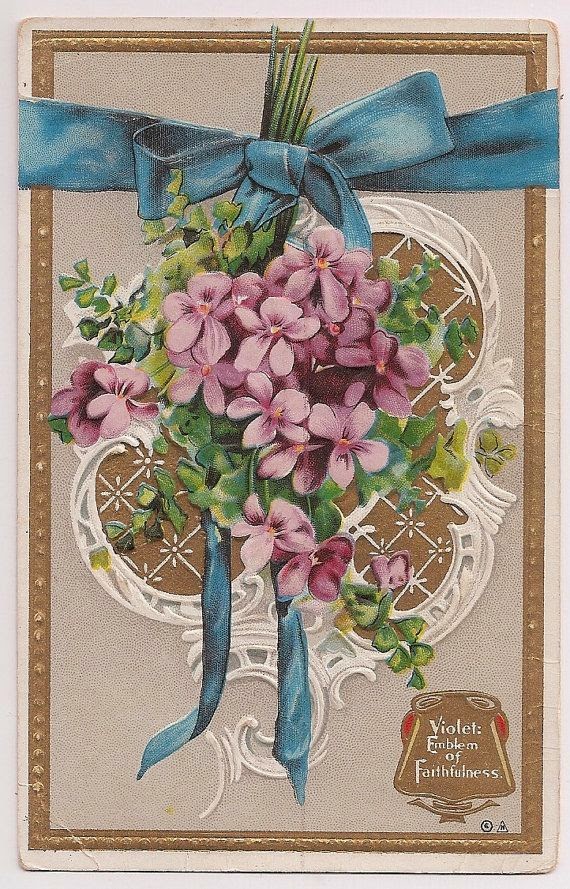 Below is the linky for your tea related posts. Also a list of some of the blogs I am joining. I love hearing from you and visiting your wonderful blogs!


An InLinkz Link-up
Posted by Antiques And Teacups at 6:12 PM