Hello and welcome to Tuesday Cuppa Tea! It has been lovely summer weather here with a touch of fall from time to time, which has triggered some allergy problems for me. But I do love walking with my honey, so sometimes ya gotta just do it!

This week my teacup is a designed around a teacup by famed designer Susie Cooper, who was in the forefront of  modern English design. 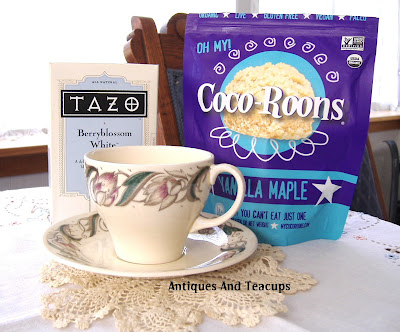 The pattern is called Endon, and is an example of her pioneering English mid century modern design with the stylized Tulips or maybe Crocuses. We take
the designs for granted now, but then she was a style setter. 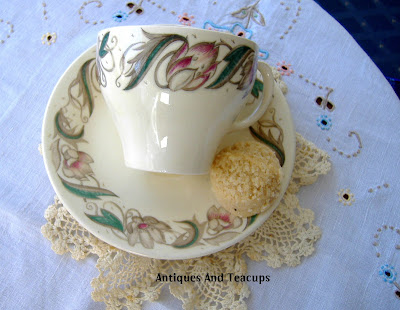 The marks used on her items from this period, 1932-1964, were pretty mix and match...she apparently used them at the Crown Works in Burslem, an area of Stoke-on-Trent. I like the one with the deer best! For more info, click on the photos. 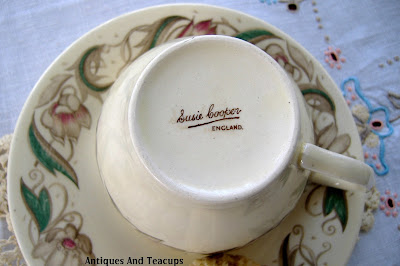 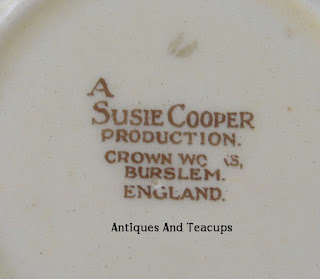 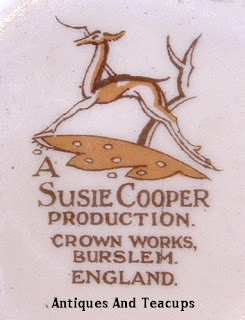 I paired this pretty teacup for tea in the sunroom today with some "clean" eating Paleo cookies we found....they are pretty good actually. We read some articles suggesting changing diets to improve the health of Parkinson's disease patients, and basically changing to not processed and refined foods as much as possible, so we are doing that.  The cookies say Bet You Can't Eat Just One...which I am sure you recognize as an old advertising slogan...and they are wrong on these because they are so nutrition dense you really only need one, small though they are! 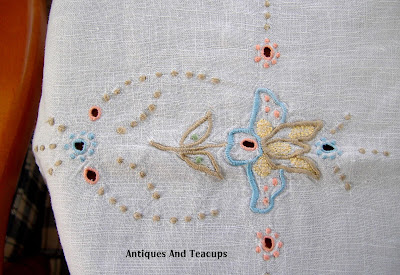 The tablecloth is another family piece from the 1930-1940s from my dear aunt. 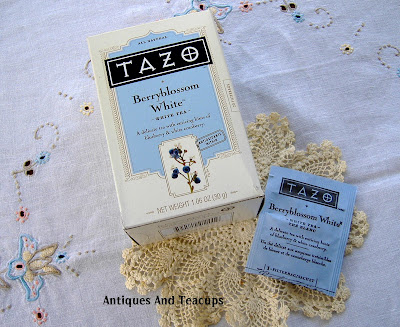 My tea is by Tazo, Berryblossom White and it is lovely! White tea is barely oxidized while black tea is fully oxidized. This has a pale straw color, a bit of astringency...not bitter...and a gorgeous blueberry smell and flavor. Lovely! 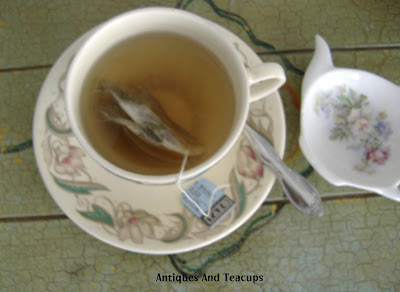 Recently, on a private Facebook group I belong to, I  met a woman who still works at the potteries, at Wedgwood, in the very small design and decoration studio in Barlaston...which has replaced the huge workshops that there before all the pottery shakeups, consolidations and closures as production was moved out of the UK.

She is a decorator, and as an industry worker, has begun collecting the salesman or pottery paint sample plates used for the colors sold to the potteries for their china. 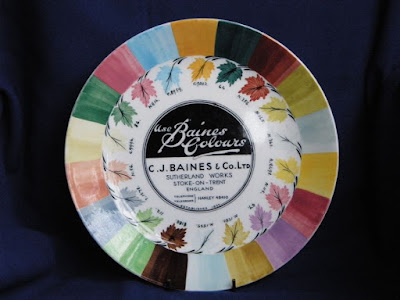 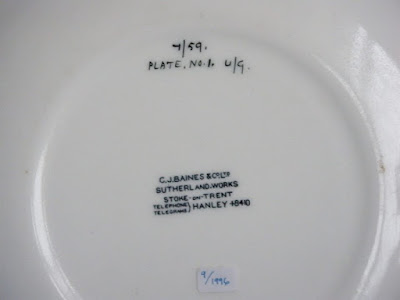 C J Baines in Fenton...another district of Stoke, made this in 1959...it is fascinating to see the colours and think that's how designs were planned. 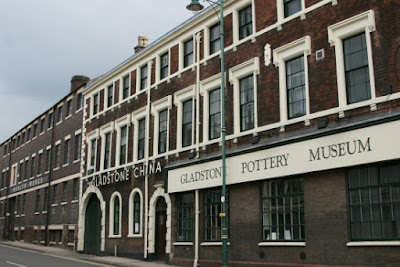 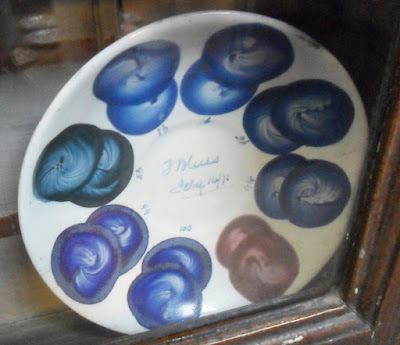 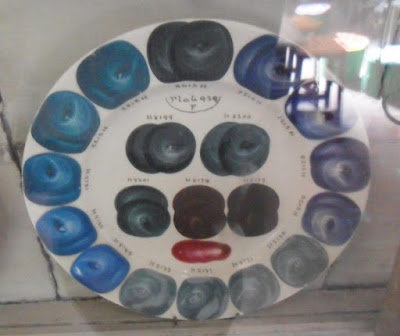 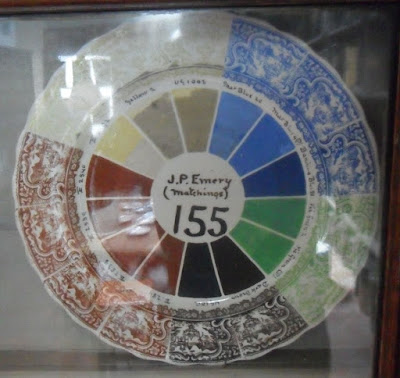 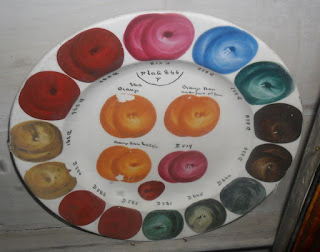 Wengers, Ltd. was another painter manufacturer. These examples are from the Gladstone Pottery Museum, and shows the various hues that were used on transferware and other designs...there were certainly different versions of blue transferware! 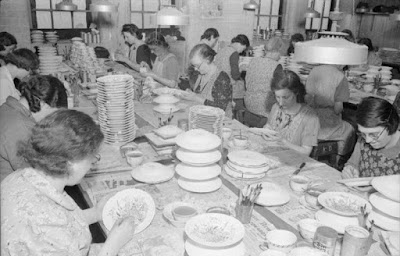 This a BBC archives photo of china painters at work at the Meakin pottery, which closed in the early 1970s. 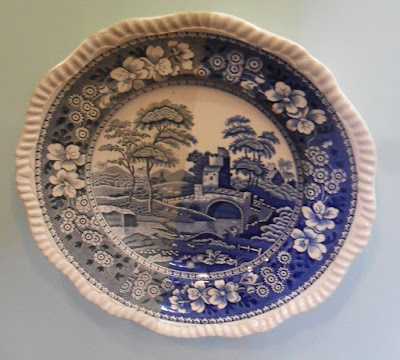 This is a Spode sample plate...no, your eyes aren't playing tricks on you, it shows the difference a certain glaze made on the color of the transfer of theis Italian Scenes plate before and after the final firing in the kiln. The right side is definitely more vivid in color. Photos of the sample plates by permission Rosie Cooke and Phil Rowley.  They have also a few marked ones from Mintons, Dudson, Spode, Royal Doulton etc. which were, I think to show as samples or to try/test various colours and prints. Now that's an interesting collection! 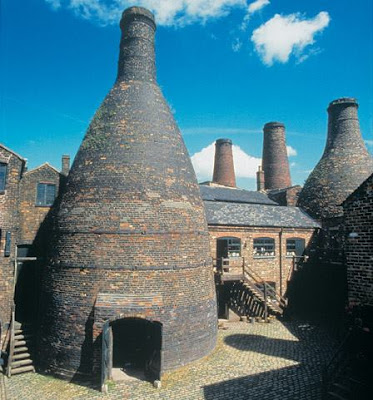 Sometime I'll share more about our visits to the Gladstone Pottery Museum...a great place to visit if you love china! 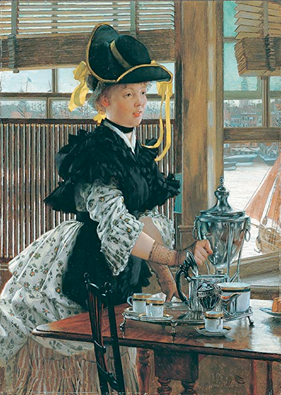 Thanks for joining me today for Tuesday Cuppa Tea, and I hope you have some last-of-summer opportunities for a relaxing cup of tea with a friend!