Hello and welcome to Tuesday Cuppa Tea on the cusp of August into September, so can fall be far behind? We just had our first major storm here which was desperately needed...hopefully putting out some of the wildfires here in Washington. Our local Olympic National Park was closed and the campgrounds evacuated because of high winds, heavy rain and downed trees yesterday....Hope it is calmer where you are!  At least the rain cleared the air of smoke!

I am sharing a polychrome, hand colored on brown transferware teacup trio with the teacup being in the breakfast or large size today.... 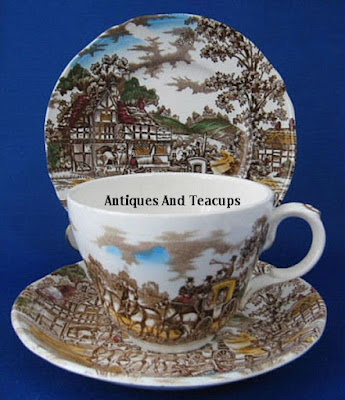 I know that a lot of folks feel like I do, fall is perfect for brown transferware, at least the magazines and the sales in my shops indicate that. I love this version made by Alfred Meakin, England in the 1940s. The pattern is Coaching Days and is hand colored on transferware. 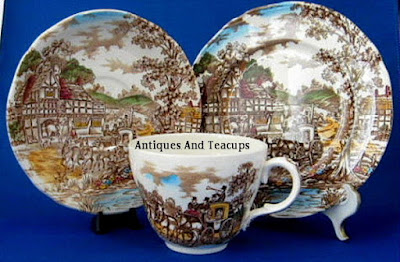 I have really had a thing for landscape designs the last month or two...have been featuring many on my Facebook page. They are such a way to be taken in a daydream while you are drinking your cup of tea to another place or time. Don't you love the inn and the coach? Notice the thatched cottage on the right..... 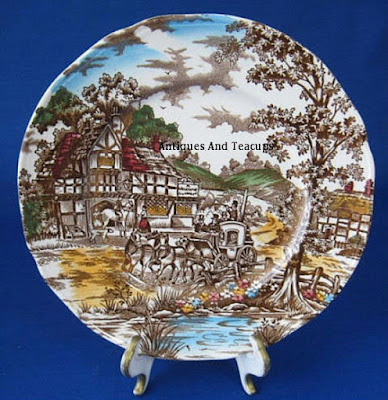 This version of Coaching Days is from the 1940s...easy to tell, because although the main mark didn't change for a few decades, the wording at the bottom did, as new info was added...note that this one says Detergent And Acid Resisting Colors...which phrase was added in the 1940s after the glaze formula was slightly changed to stop acid foods discoloring the ironstone. 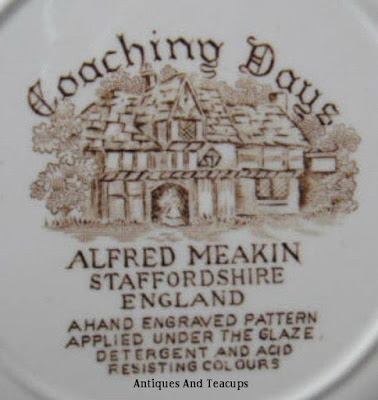 Alfred Meakin began in Tunstall, by Stoke-on-Trent in 1875, from the Meakin family of potters. The family busness went through several modifications until 1958 when they taken over by Midwiner, which was then bought by Wedgwood in 1970 when the patterns were reissued by Johnson Brothers, then also a part of the Wedgwood conglomerate. The Meakin brand name was totally abandoned in 2000. Sigh...and as reported by me a blog or so ago, Wedgwood became Wedgwood Waterford Royal Doulton or WWRD who was just bought by the Fiskars Company of Denmark on July 15, 2015. 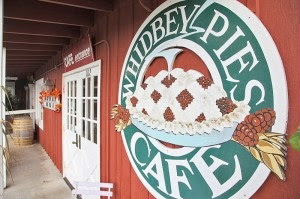 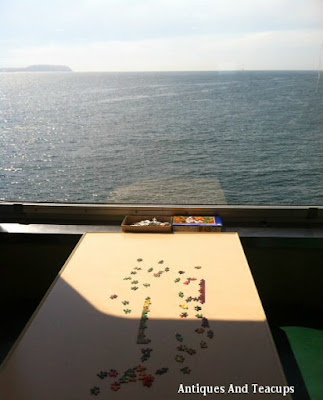 I always love the fact that this ferry, which takes 35 minutes, has many of the tables stocked with jigsaw puzzles so folks have something to do during the crossing. Lots of collaboration and meeting new people done over the puzzles...

Whidbey Island is quite rural, and boast forests and lots of organic farming, and we headed to Greenbank to Greenbank Farms...we had taken the early ferry, so arrived just as they were opening up... 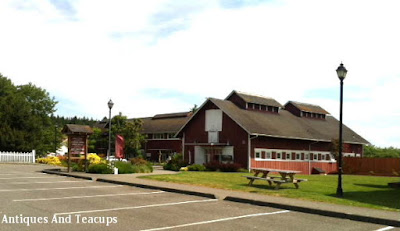 There are various shops and artisans including a winery, local farm product, a potter, and art gallery and an island themed gift shop. The farm is used as a venue for all sorts of festivals during the year as well as weddings in their big barn. 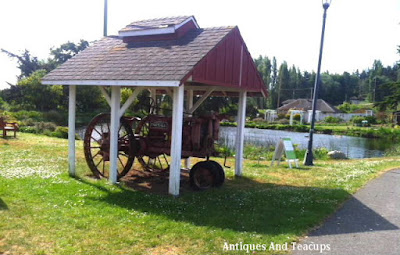 There are a lot of antique farm equipment scattered about, and a great pond by an herb garden that was occupied with lots of Canada Geese. 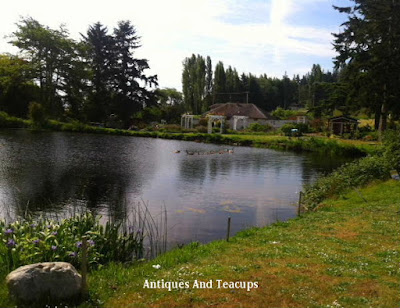 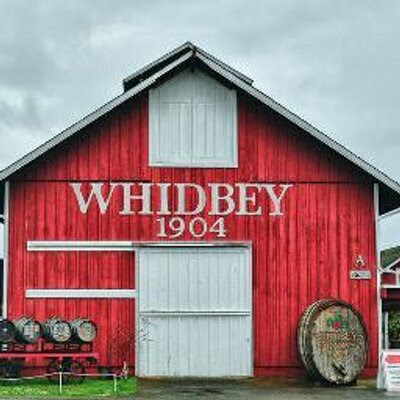 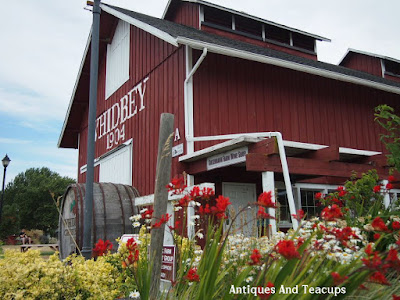 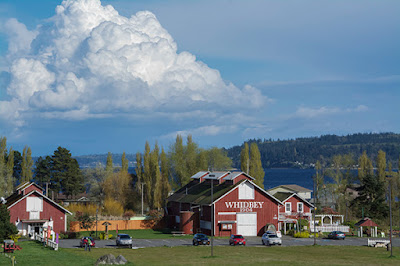 The weather was pretty good, but with a cool wind a threat of thunder storms. But we had planned our visit to the island to be at Whidbey Pies for lunch. 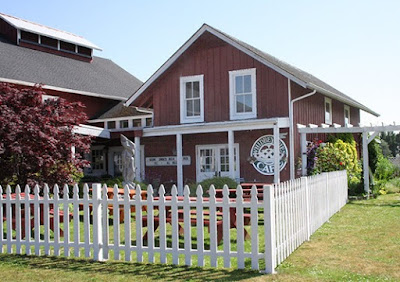 Whidbey Pies is pretty famous around here, so... 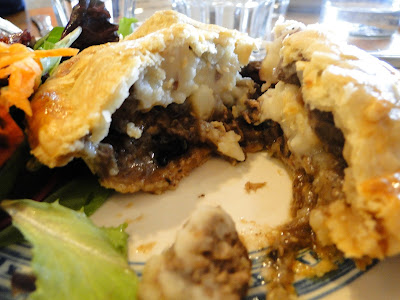 Besides our huge mugs of tea we had their Shepherd's Pie with local grass fed lamb and organic salad greens a herbs from right outside the restaurant. Which was wonderful!  They had already sold out of their scones as although the restaurant had just opened, phone orders pour in and the days bake disappears quickly. While we were eating folks came in in a steady stream to pick up their orders. 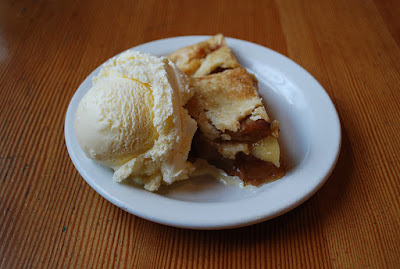 One of the things they are famous for is their pies...so we had apple pie ala mode...this is my 1/2 portion...as we had seen a piece go by and it was huge, and came with 2 scoops so we ordered an extra plate. Delicious! 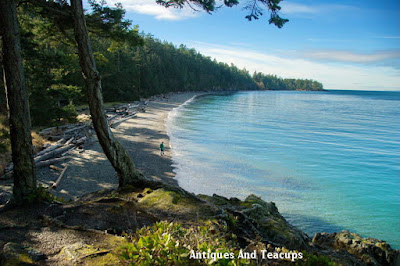 We wandered around the island, and especially enjoyed a beach stop at North Beach by Coupeville, and then took the ferry back hope. A lovely day! But...we brought home a souvenir from a local artist with a teacup theme...this is an original watercolor drawing by Gaylen Whiteman called Fascination...I LOVE it! 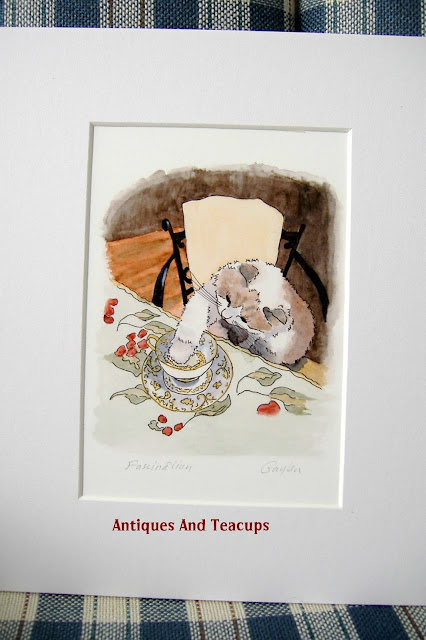 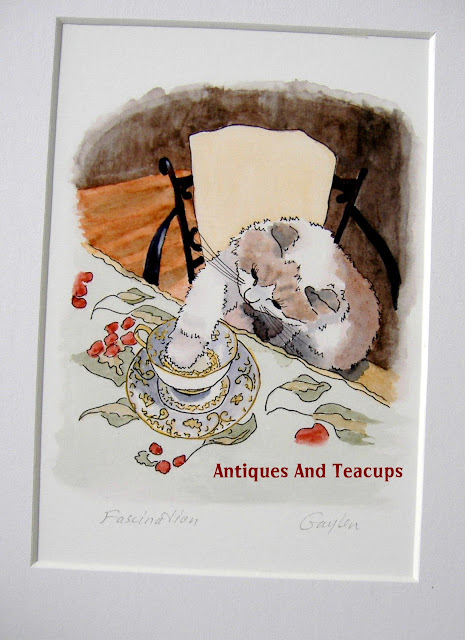 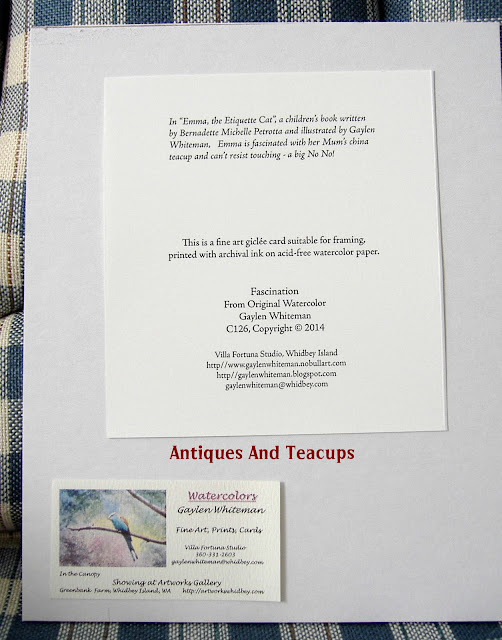 Glad you could join me for tea today, and a little local journey. I will be in and out for the next couple of weeks with company, trips to see kids and other things.  Below is the list of some of the blog parties I will be part of and there is the linky for your tea related posts...please remember that it is SSSLLLOOOOOOWWWW but if you are patient...it's there! And I love to read your comments, and can find you to visit!