Welcome to March and burgeoning spring! 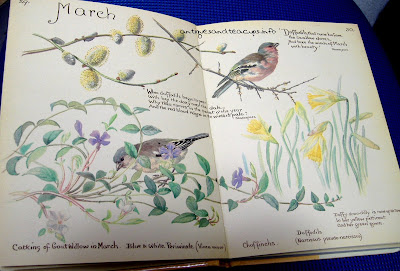 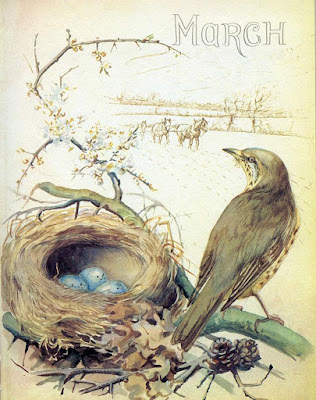 From the Country Diary Of An Edwardian Lady by Edith Holden...

I was thinking about where we are in the spring progression here in the Pacific Northwest. We are in the crocus stage...far behind most of the rest of the country. Here is what is growing in our yard...the rest are buds... 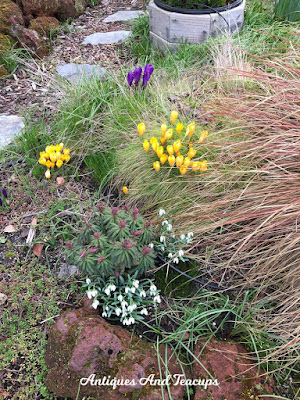 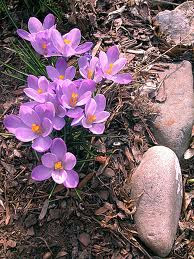 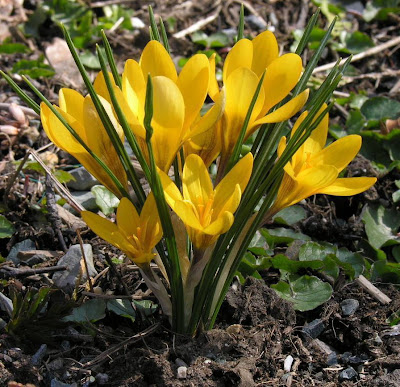 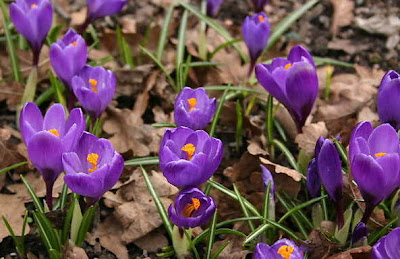 I was trying to remember if I have anything with crocuses, and remembered I have some Aynsley, England china in what is called the Crocus shape, which they used with many different patterns. This is just a go with anything white, but I love it because it is so versatile... you will see it next week dressed with Shamrocks, but this week it's just white with gold trim 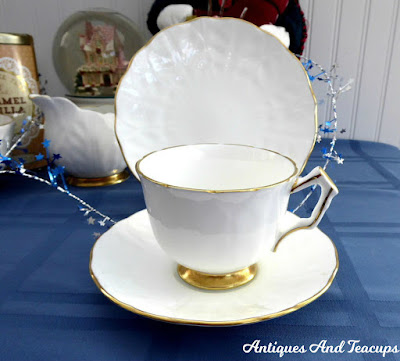 It's a bit hard to see in this photo of the teacup trio, but the entire shape is molded beautifully like crocus flowers... 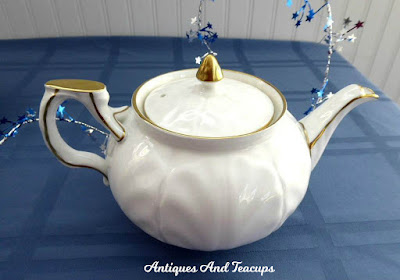 Maybe this is easier to see.. 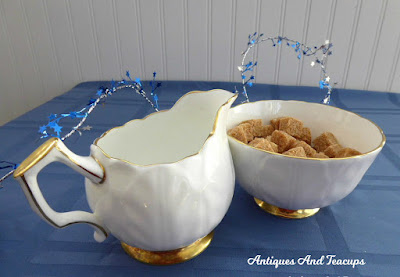 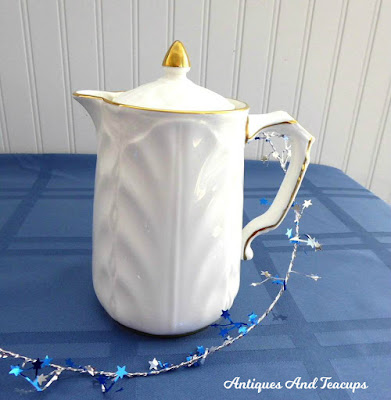 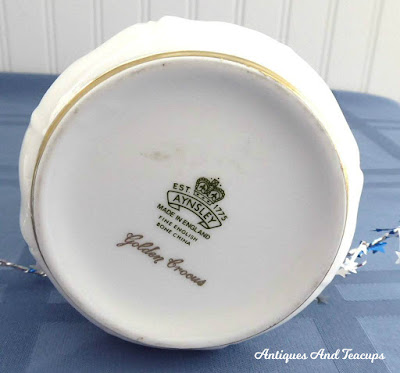 Aynsley had a long history... starting in 1775 and continuing in the same pottery through many revisions, splits and acquisitions in Longton which is a district known for potteries in Stoke-on-Trent. In 1987, about when this items were made, Aynsley became part of WWRD, Wedgwood Waterford Royal Doulton, then split out by Belleek in 1997.
The pottery location was closed in 2014 and manufacturing under the Aynsley name was moved to China where production was reduced.
I am not sure what is going on now, but the factory shop in Longton was open in 2015, but I could tell the marks meant the items were made in China.
Sad.
Click on the photos for more info on any of the items at Antiques And Teacups 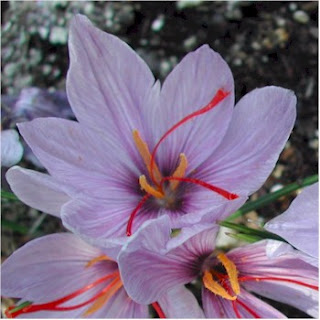 I wanted to talk about crocuses also, because their stamens are the source  of the spice saffron. This photo is courtesy of www.gourmetsleuth.com which explains why the spice is so expensive. The crocus flowers are grown particularly for their stamens, only 3 to a bloom in areas like Iran and India 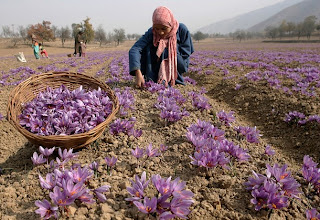 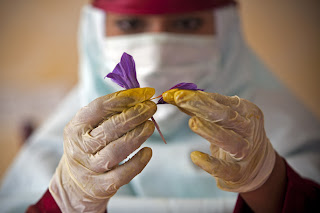 And the stamens have to be removed by hand...so it's an expensive process. Here is my jar and the strands.... 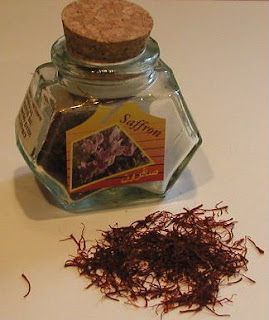 That's over $10 dollars of spice! Saffron is also used to give a distinctive yellow color to foods.  I use it in a risotto I make and in an Indian rice dish with cashews and peas which I am sharing below. I happened to find an identical recipe to mine online, although mine is from an old Diet For A Small Planet cookbook from the 1970s...would have photographed that, but it doesn't have a cover any longer! We love Indian food and Indian spiced food. This is very nice and I make it quite often.
Maybe not for afternoon tea, but high tea with chicken added... we do anyway! 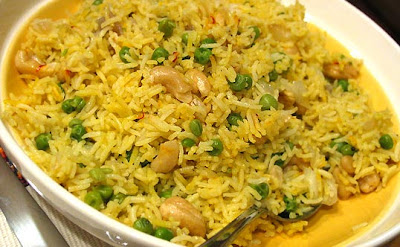 Saffron Rice with Peas and Cashews


Rice is a staple of many diets across the world. It's endlessly flexible and variable; it can be a dessert, a side dish, a main dish. As good as plain white rice can be, we love to dress up our rice just a little. All it takes is a pinch of this and that...
This slightly sweet and nutty rice has the golden flavor of saffron that spreads throughout the dish as the rice cooks. It also has tender little peas and cashews that have been softened in cooking. This mix of colors and flavors is warming and refreshing. We serve it with good lamb curry or eat it on its own with a little yogurt for a light vegetarian dinner.
Saffron Rice with Peas and Cashews
serves 4-6
1 tablespoon oil
2 cups Basmati rice, well-rinsed and washed
1/2 teaspoon (2 pinches) saffron threads
1 cup lightly salted cashew halves
1 cup frozen organic peas
3 1/2 cups water
1/2 teaspoon garam masala
1 teaspoon salt, or to taste
Wash and drain rice. Heat the oil over medium-high heat in a 4 quart pot. Add the rice and fry a couple minutes. Add the saffron threads and cashew halves and fry for another minute. Add the peas, fry for a few moments, then add the water, stir, and bring to a boil. Reduce to a simmer, cover, and cook for 18-20 minutes.
Take off the lid and turn the heat off. Stir in the spice and salt to taste. Let the rice sit to "dry" for a few minutes. Serve.
Taken from www.thekitchn.com 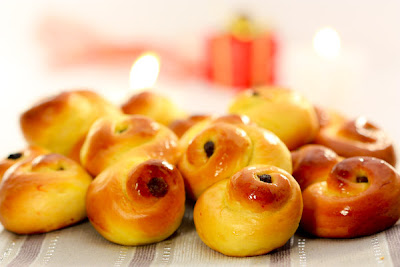 These are saffron buns, and if you have any Scandanavian ancestry, you probably have these around December and for St. Lucia's Day.  The distinctly yellow color and equally distinct flavor is the saffron form thos little crocuses! Amazing!
Now there's a tea treat!

Have a lovely week!
Posted by Antiques And Teacups at 4:00 AM