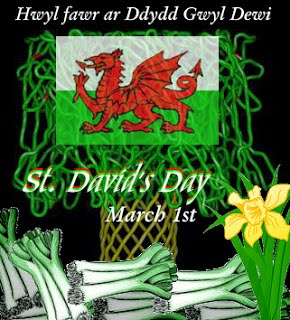 Hello and welcome to Tuesday Cuppa Tea for the first week in march...and that begins with the Welsh National holiday St. David's Day!

The Welsh national symbols are Daffodils, and leeks, so I have chosen a Shelley China, England teacup called Daffodil Time as my teacup this week fot Tuesday Cuppa Tea... 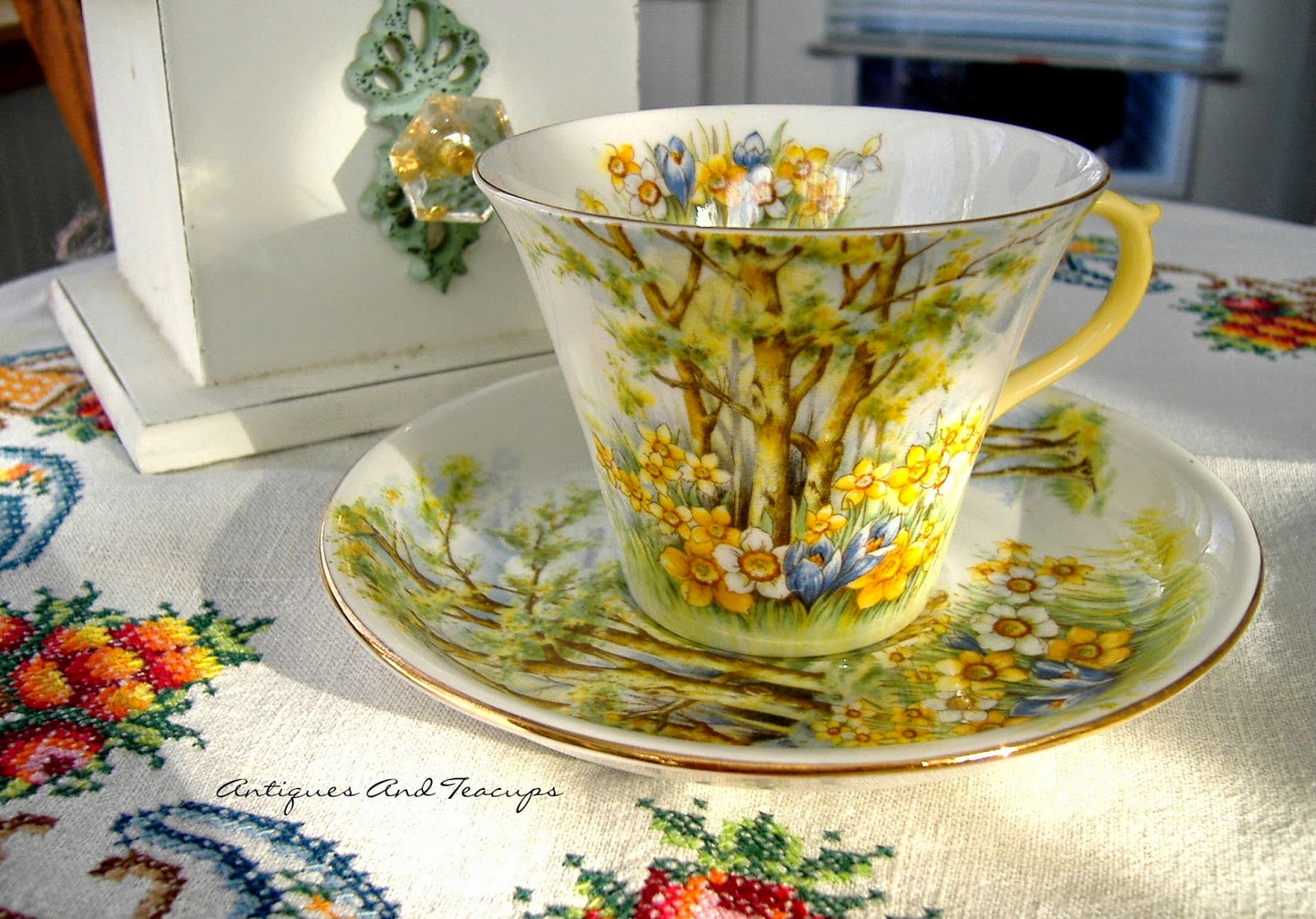 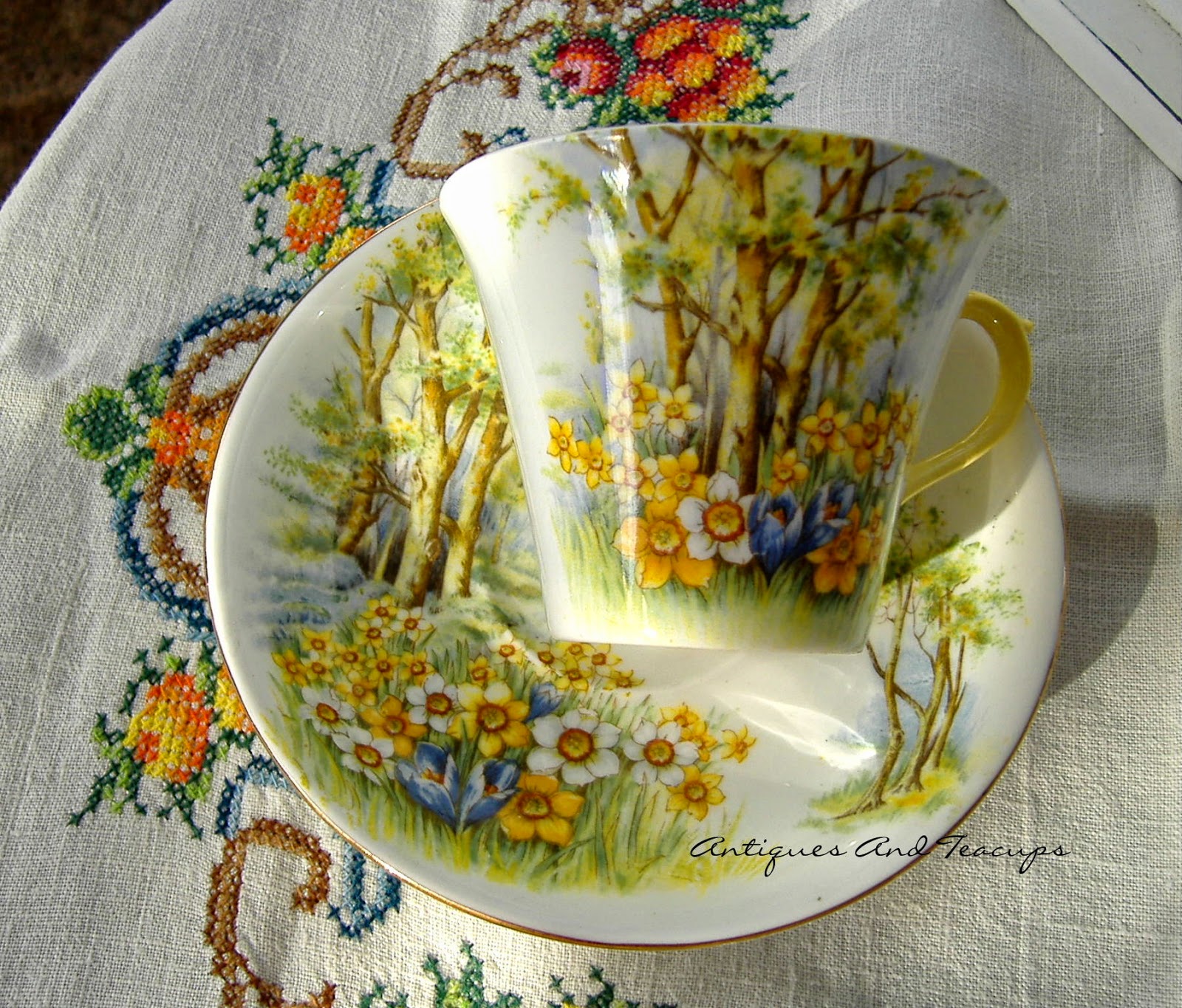 I love landscape designs, and this is a favorite. The forest with it's blanket of cheery Daffodils...my favorite flower, well one of them...just sings of spring...The teacup and saucer is in the art deco Perth shape, which isn't seen too often, although I love the art deco lines. The pattern name is Daffodil Time with the number is  13370, was made between 1940 and 1966 when the pottery closed, but the Perth shape was discontinued in 1960. The teacup was actually made between 1940 and 1952, because it doesn't have the pattern name on the mark, which began to be used in 1952. The pattern was also used on Cambridge, Dainty, Henley, New Cambridge, Richmond and Victor shapes, and was one of Shelley's most popular landscape designs. 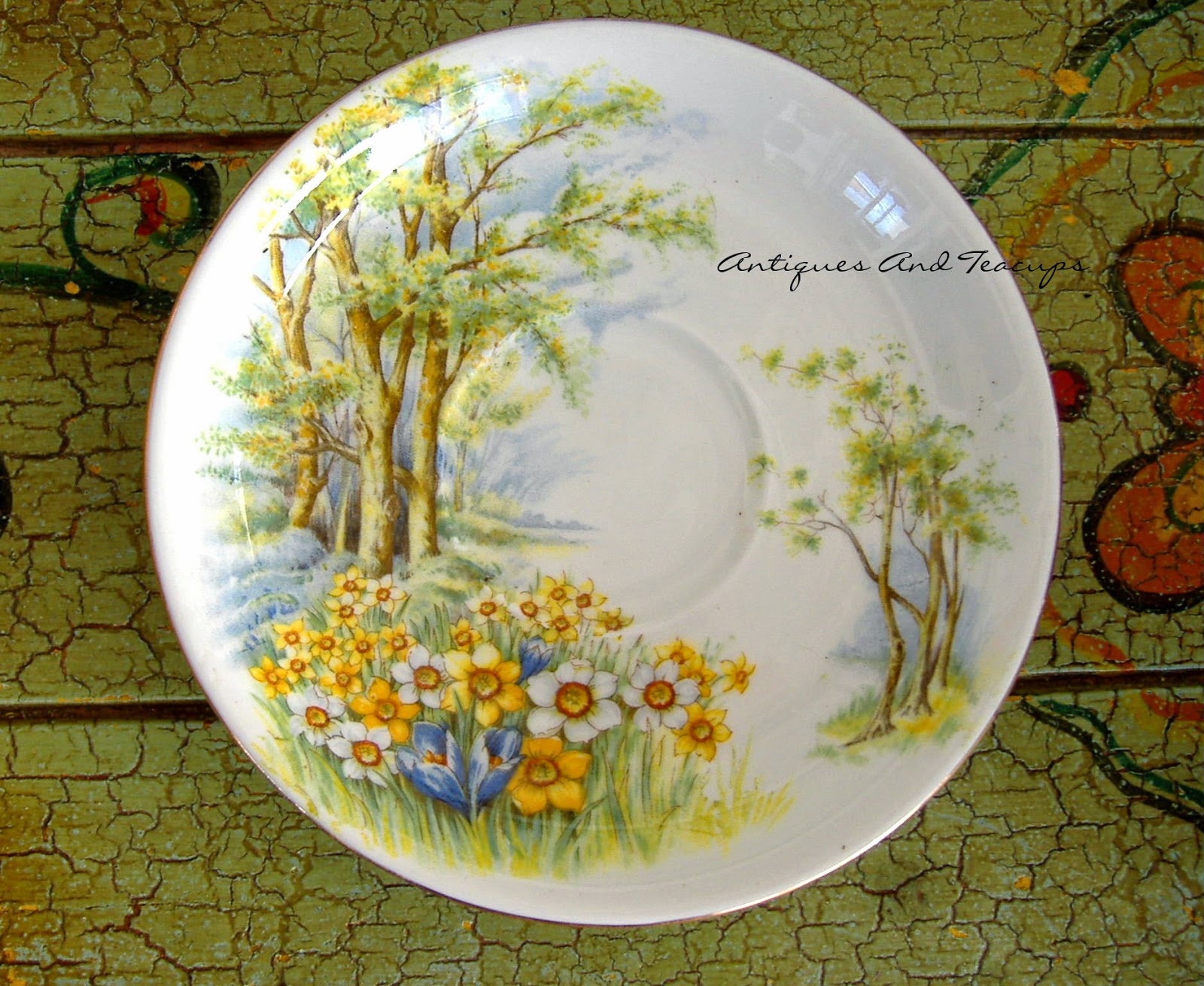 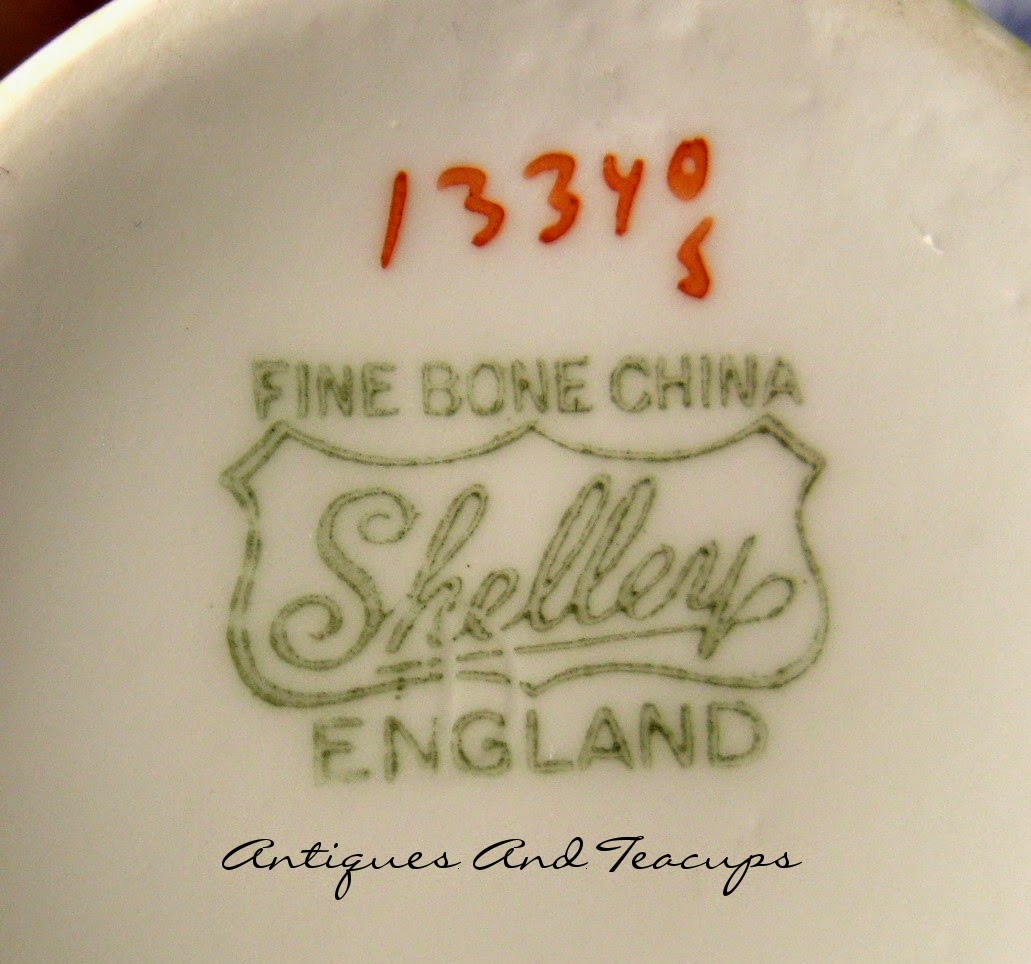 The number 5 below the pattern number is the trim color...which is yellow handle with gold trim. It came in various other combos trims of no gold with yellow and with green. I do love Shelley, and I especially love how good their record keeping was! 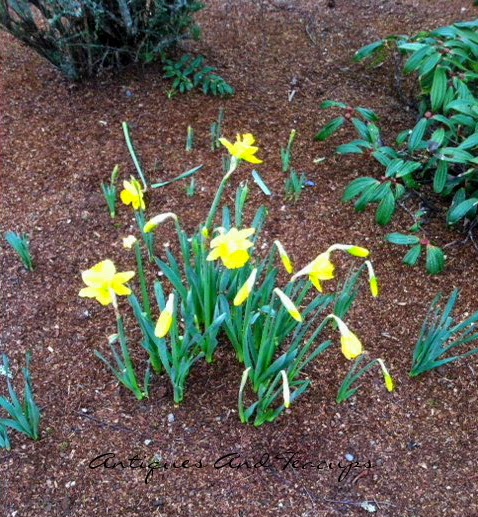 Not all that impressive, but our first Daffodils are out...just in time for St. David's Day!  I found this great list of facts about St. David, or Dayffyd's day on the Daily Mirror site...

1. St David’s Day falls every year on March 1. This was the date patron saint of Wales, St. David died in 589.
2. It wasn’t until the 18th century, though, that St David’s Day was declared a national day of celebration in Wales.
3. Saint David is typically depicted holding a dove, and often standing on a hillock. His symbol is the leek.
4. In 2007 Tony Blair rejected calls for St. David’s Day to become a Welsh national holiday, despite a poll saying that 87% of Welsh people wanted a March 1 holiday.
5. A Welsh stew, named Cawl and containing lamb and leeks, is traditionally consumed on St. David’s Day.
6. Across Wales on Mar 1 St. David’s Day parades take place, and in bigger cities food festivals, concerts and street parties also occur.
7. 2009 saw the inaugural St. David’s Week festival in Swansea, a week-long event featuring music, sporting and cultural events.
8. Bizarrely, Disney's Mickey and Minnie were turned Welsh last year for the Disneyland Paris St David's Welsh Festival.
9. St David's Day in Welsh is Dydd Gwyl Dewi Sant.
10. Despite the fact that Saint David abstained from drinking and advised others to do the same, a number of Welsh breweries make special St. David’s Day ales.
from The Mirror.co.uk 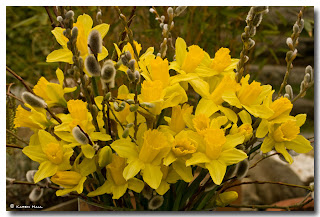 The national flower of Wales is the Daffodil which is often paired with the leek, the national symbol of Wales with the red dragon. St. David's Day, or Dayffd's Day is celebrated with all of these symbols. 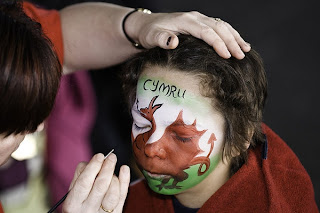 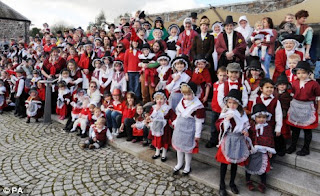 St. David was born in the 6th century and was a hero during wars with the Normans and was canonized and became the patron saint of the Welsh. St David's Day is celebrated with traditional clothing, parades and lots of red Welsh dragons. 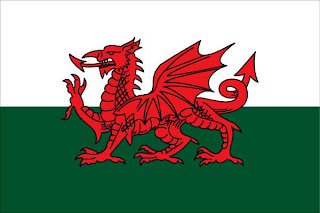 For more info on the Shelley teacup at Antiques And Teacups, click on the photos. 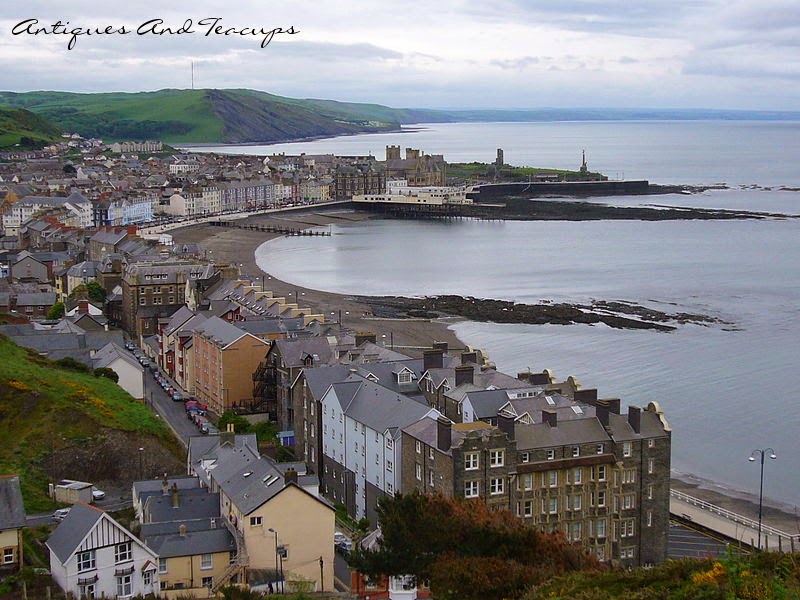 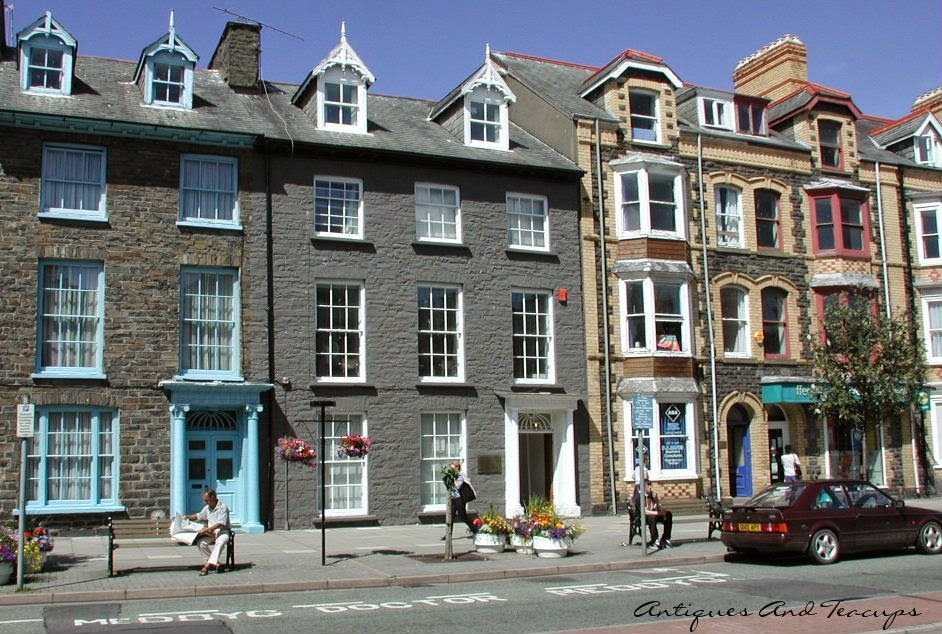 Wales is a favorite place of ours in the UK...my husband's family often went from the Midlands to Wales on holiday, and my husband took me to Aberysthwyth above and Abersoch below where his family often holidayed as he was growing up... 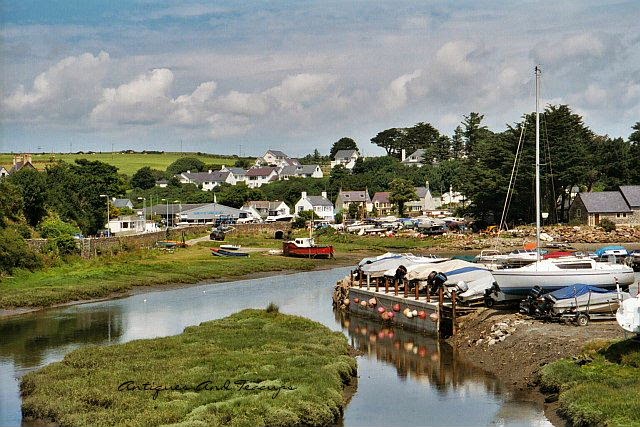 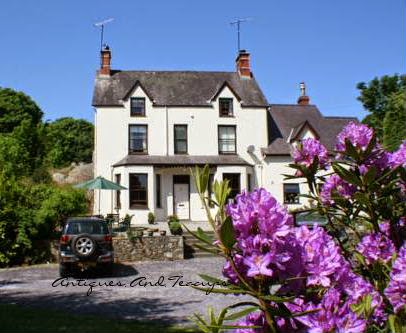 on one trip staying at the small Craig-y-Glyn hotel with our niece for 3 days...laughing ourselves silly on the trip trying to pronounce Welsh place names...and talking about her new found faith in Christ...my husband had just led her to the Lord a few days before...she was 24 then...she is now married to a pastor and her daughter has married another pastor and they are sharing the ministry in the town of Morecombe in the north of England...Lovely memories! 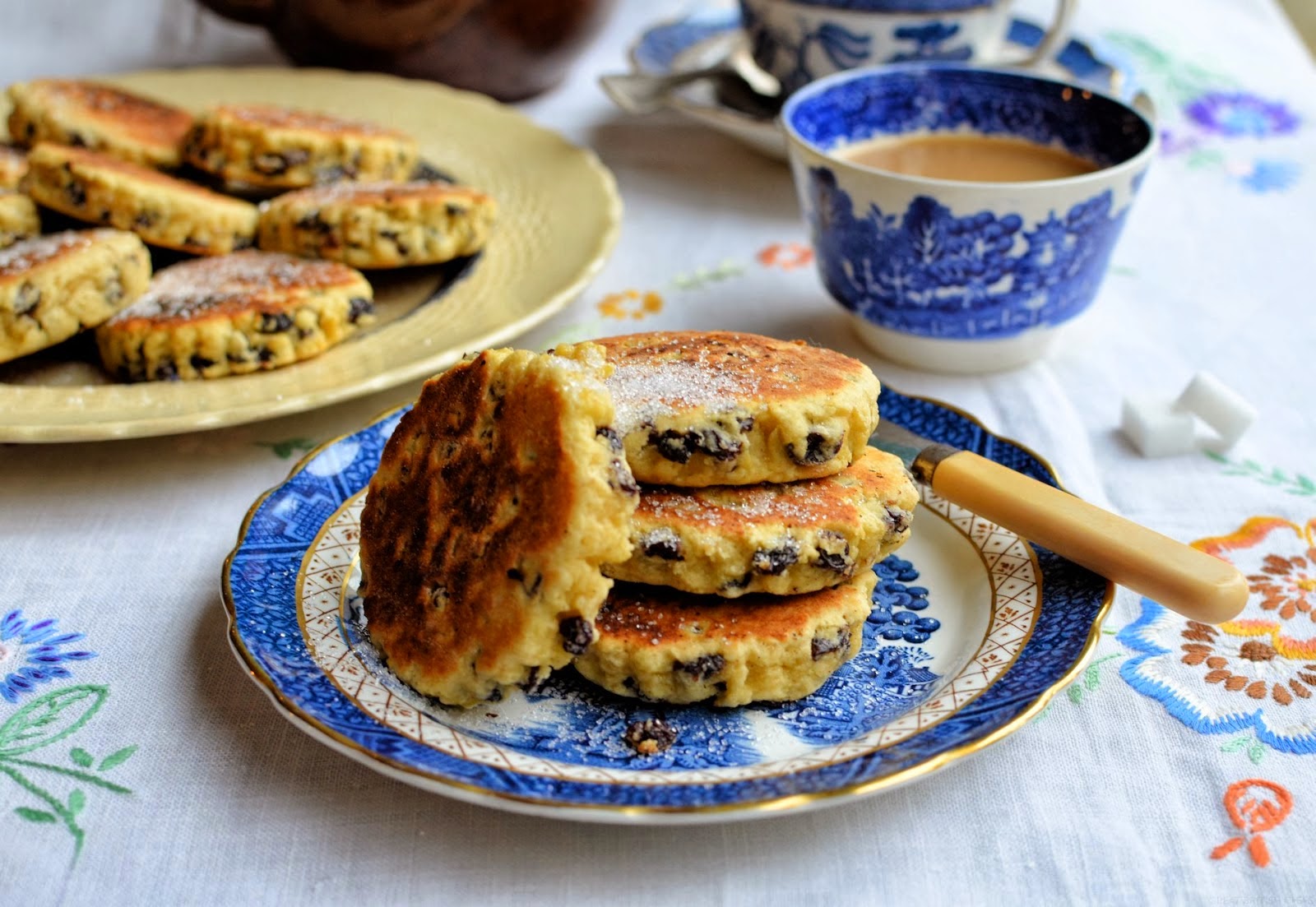 A traditional food for St. David's Day, which you can make easily...or in England find at the food halls year round of Aldi, Sainsbury's or Marks and Spencer's (lovingly known as Marks and Sparks)  is the Welsh Cake which I love. They are a great item with a cup of tea at teatime! 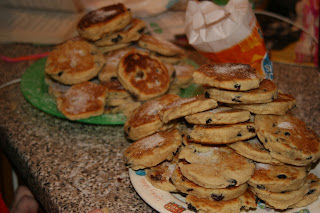 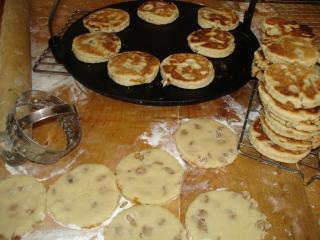 An InLinkz Link-up
Posted by Antiques And Teacups at 6:30 PM