Hi there and welcome to Tuesday Cuppa Tea! There is no linky for the next 3 Tuesdays because I am having a blog break for family and general holiday. We will visit friend and family, and they are coming to us as well. So rather than be concerned about getting posts done in the midst of clamoring activies at this end of summer holiday, I figured I'd just take a break. If I can put together a Tuesday Cuppa Tea and do a scheduler, I will but there won't be a linky, and I won't be very prompt on my comment replies. The blogs I am joining are at the bottom.

For this Tuesday Cuppa Tea, I have a Shelley China cup and saucer in the Dainty shape that was made in the 1890s-1910s. The generic term for these types of teacups are Crested Ware. In England, souvenirs were brought home from Grand Tours to the European nations, and from domestic holidays closer to home in the various holiday spots in the UK. And everyone wanted to bring home a souvenir! The Victorians and Edwardians were famous for it! Crested Wares were tremendously popular, and most cities contracted to have them made. The Crested souvenirs were done with a black transfer that is then hand painted in enamels. And the competence of the artists vary greatly! But that's half the fun! 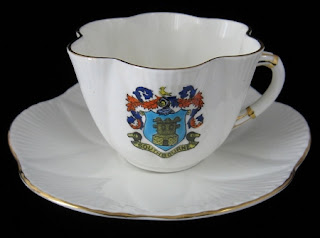 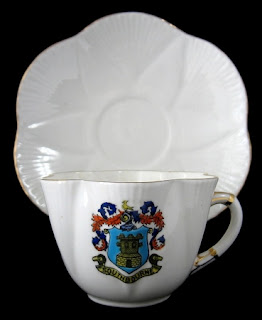 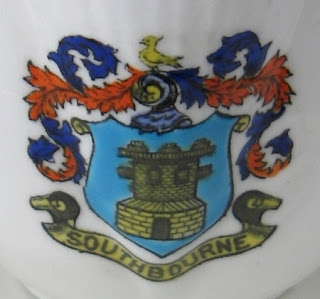 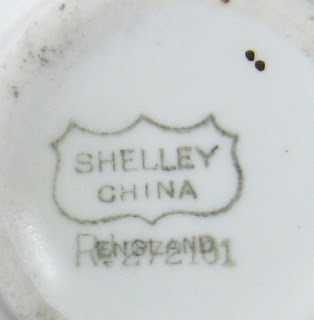 Some of the most famous makers who made a lot of Crested Wares were Shelly, Goss, Royal Albert and Carlton Ware. They fun of them were the various shapes, which range from risque, to local bathing beauties and beauty spots to various forms of transportation and local symbols and all sorts of items for the home like teapots, teacups, tea tiles, soap dishes, vases and much more. Here are a few that I have or have at the moment.... 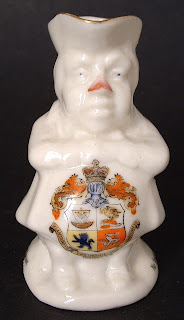 This little toby character jug is by Shelley China, 1918-1925 and has the motto

"No Tongue Can Tell, No Brain Can Think, Oh! How I Love, A Drop Of Drink"
and the crest for Douglas, Isle of man...notice his red nose... 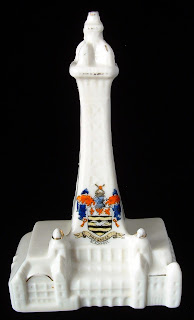 This is the famous tower in Blackpool, England
Shelley China, 1910-1916 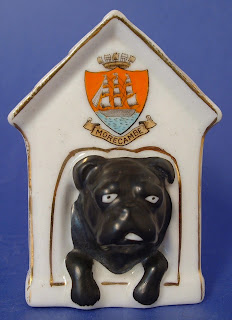 This is a Shelley China black dog in a doghouse with the crest for Morecambe, Lancashire England and gold trim. On the top are the words The Black Watch which is a pun on the black dog who is supposed to be a watch dog and the name of a famous regiment of Guards. This is also 1910-1916.

This is a hand holding a pig's leg, or trotter, a local delicacy in Bolton, England who's crest is shown. This was made by Carlton Ware, or Carlton China, Wiltshaw and Robinson between 1906-1924. 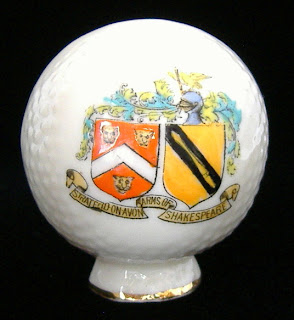 And this is a Shelley China golf ball with the crest or arms of Shakespeare and Stratford-on-Avon, made 1916-1924.  I picked this up in the UK because that's where my husband was born and he's a golfer! I love Crested ware souvenirs! Fun, aren't they??? They are quite a large collecting genre with lots of fans and collecting societies all over the world. The teacup is available at Antiques And Teacups. For more info click on the photos. 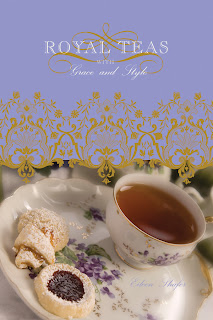 I also wanted to share a nice tea book called Traditions - Royal Teas With Grace And Style by Eileen B. Shafer. The book was published in 2010, and I recently found it on sale until Sept. 30, 2012 at dorrancebookstore.com.  The well illustrated hardcover features tea recipes and information on hosting a proper tea. The book was reviewed in the Tea House Times  in the Sept/Oct Issue. The book has lots of great info and recipes. 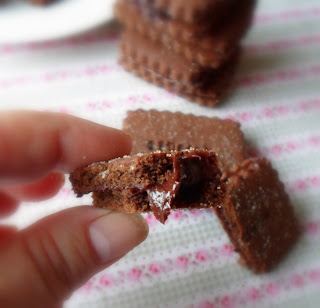 And you have GOT to visit The English Kitchen blog for her Bourbon biscuits (cookies to the Yanks) which are my fave! But she shares a recipe...see above...to make them at home. The recipe is from Jamie Oliver's website Jamie Magazine...another Brit winner!

Mrs. Olson ~  http://jannolson.blogspot.com/
Share Your Cup Thursday
Posted by Antiques And Teacups at 8:00 AM