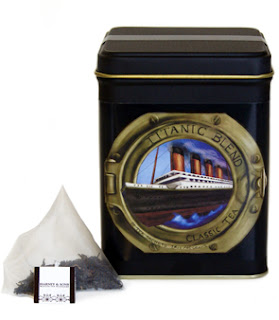 I just want you tea lovers out there to know that Harney &Sons Tea has just launched (yep...their pun) a RMS Titanic Blend Tea for the centennial of the of it's sinking. Here is what is on their website:

Titanic Tea is our latest endeavor, created as a tribute to the tragedy and heroism of “A Night to Remember”. PH Nargeolet, one of the divers with the French exploratory group at Woods Hole in Massachusetts when the Titanic was found, encouraged John Harney to create a commemorative tea to honor the 100th Anniversary of those who perished when the Titanic sank. John has created a tea blend which reflects the quality of tea that was served on the Titanic.

There is Chinese Keemun, one of the last teas British still consumed in 1912. The British had mostly switched to black teas from Assam, India and Ceylon. Also there is Formosa Oolong, which was popularized in both the UK and the US by an enterprising Brit. So this blend would have been recognizable to tea lovers a hundred years ago.
A portion of the sales of our RMS Titanic Tea will go to The Ocean Conservancy, the dedicated organization committed to preserving one of the Earth's most valuable resources, our Oceans. We hope you will enjoy this tea, and “Remember".

Here is the link to the tea on the Harney &Sons Website:

Posted by Antiques And Teacups at 4:45 PM