I thought I'd do a follow up post to Downton Abbey's 3rd episode on PBS last night. I had posted the photo of Lady Sybil in a blue dress yesterday...mostly because blue is my favorite color. But what also intrigued me was that I couln't be sure what the skirt was, perhaps a hobble skirt, and because Lady Sybil was displaying an inordinate amount of...shock!...ankle!

After seeing the program last night, I now know it was not a hobble skirt...which restricted the walking pace to tiny steps by a band around the ankles....a style of dress called "rational" at the time which was a sign of the loosening of the restrictive stays of society (pun intended) placed upon women.


Rational dress began to appear in the 1890s as a result of the industrial revolution which freed women to the work force from the more restrictive society of the home. As women became more educated and began to long for freedom form the retraints placed upon them in the victorian age which included floor length skirts, corsets producing 20 inch waists (accompanied by much fainting) and strict rules of dress and decorum, a "new" woman, a Rational woman began to develop. Rational dress freed women to walk more easily, ride bicycles and usually also meant the abandoning of corsets. A woman in pants was considered fast or worse which would mean death in society. Rational women were also concerned with votes for women and equality among the stratum of the social system.


Lady Sybil also flouted convention by showing her ankles with the shorter skirt. Ankles were an errogenous zone almost equal with the bosom, so this was indeed shocking!


Although at times I am seduced by the lovelier, more gracious Victorian and Edwardian ages...which, by the way only extended to the moneied classes, not to the bulk of the population which was working class...I am very relieved not to have to live under the severe stricture women lived under.


I also want to share a lovely Myott, England Bermuda Chintz lugged cake plate from Antiques And Teacups. I just love the lush, tropical feeling of the pattern, so reminiscent of Bermuda. Just beautiful I can see some petit fours on this cake plate at a well set tea table. 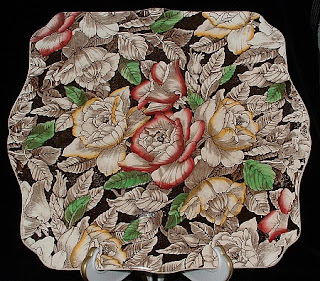 I always fear that creation will expire before teatime.
~Sydney Smith