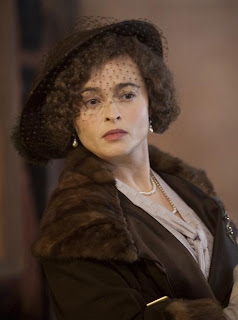 Well...just got back from seeing The King's Speech at a local theater and absolutely loved it! Heard before it started that Tim Cooper, the director had approached the Queen Mum, Elizabeth in the 1970s about filming the story which had appeared in a reader's theater off the West End, but she asked him not to make a movie of it whilst she was alive, as it was such a difficult and painful time for her that she didn't want to revisit extensively. Tim had to wait 28 years until she died at 101 in 2002. 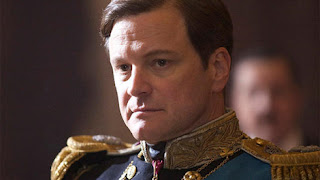 The story centers around Albert,  younger son of King George V and Queen Mary who is forced into a role he hadn't been raised for because his older brother David abdicates the throne a few months after being crowned King Edward VIII to marry a twice divorced American divorcee and was a Nazi supporter.  Albert has a stammer and the story revolves around the work with a speech therapist who becomes a life long friend and is a true story. My family and my husband's as well have stories about the royal family at that time, the stammer, abdication and the absolutely brilliant job George VI and his wife Elizabeth did during the war. The general opinion was that England, and possibly the rest of the world would have had a very different fate if Edward VIII had remained king.


Another fun thing about the movie was...spot the actor. Such a lot of famous faces in the cast!
Derek Jacoby as the archbishop (Cadfael)
Jennifer Ehle as Myrtle Logue  (Elizabeth Bennet with Colin Firth in Pride & Prejudice)
Michael Gambon as King George V (Maigret)
Clair Bloom as Queen Mary
David Bamber as the theater director (cousin Rev. Mr. Collins in Pride & Prejudice with
Firth & Ehle) 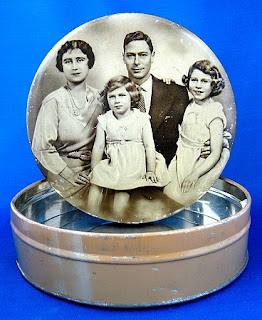 A biscuit tin with the royal family at the time of their coronation at Antiques And Teacups. To see more info on the tin visit this link:
George VI, Elizabeth and Princesses Tin


If you haven't seen the movie, we recommend it. A bit of language that I wish hadn't been there, but it has an R rating because of it. I just overlooked it because of the strength of the story after a cringe or 2.

Posted by Antiques And Teacups at 9:20 PM