Just a Tea Time With HobNobs!

Summer is still in control this week... so good thing we got our English tea and goodies orders a week ago, when it was still ordinary Pacific Northwest weather!
Hence, a teatime with one of our treats, because they don't last long around here! 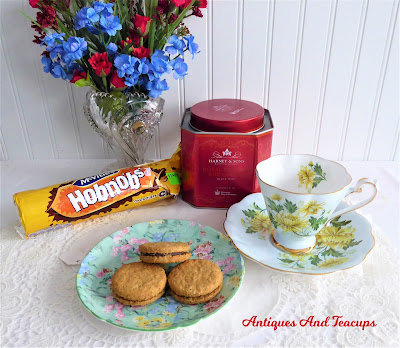 We spend a lot of time in our sunroom... during the winter it has the most light. But occasionally in the summer... as it has the last few days... we are okay until maybe 2pm, then have to close the door into the rest of the house and open the windows to regulate the temperature, and stay out until the evening when the shade from the trees again blocks the direct sun. It got to 90 something yesterday... 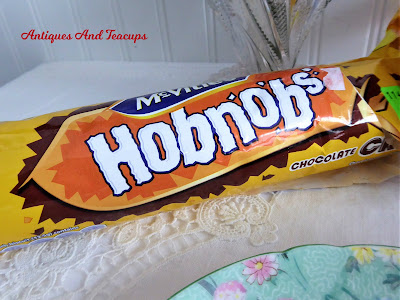 As or British treat biscuits... or cookies to Yanks... have chocolate cream inside, they would have melted in the sunroom yesterday afternoon!
HobNobs by McVitie's are probably our favorite biscuit... normally the "nobbly, oatey" biscuit with a layer of plain , ie, dark chocolate on the top. But I saw these, and they are new to us. 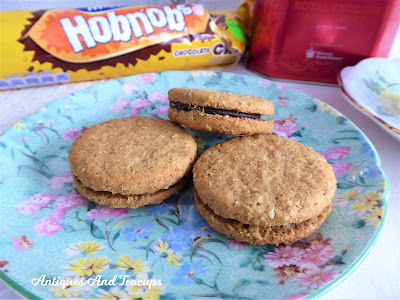 And although about 1/2 the side of regular HobNobs, they are the same nobbly, oatey goodness with the chocolate as a cream layer inside. Very tasty!
I used a Shelley spare Melody Chintz saucer. After 40 years of dealing in Shelley china, I have accumulated quite a few orphan cups and saucers without partners. I use the spare saucers for all sorts of things! 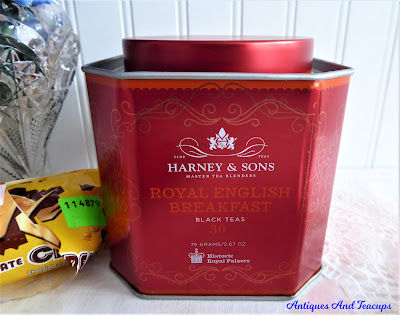 Besides the British food order, I also had an order from Harney and Sons, and they had a special on a tin of this tea which I hadn't had for awhile...
from their Historic Royal Palaces collection, their Royal English Breakfast.
Quite nice and brisk, but I prefer a bit more Darjeeling lightness and taste depth. My husband likes it though. 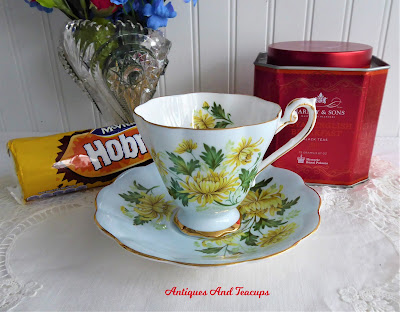 And a pretty teacup too! This is in a pale blue pattern with Chrysanthemums called Romance, pattern number 1919.
I love the elegant shape. 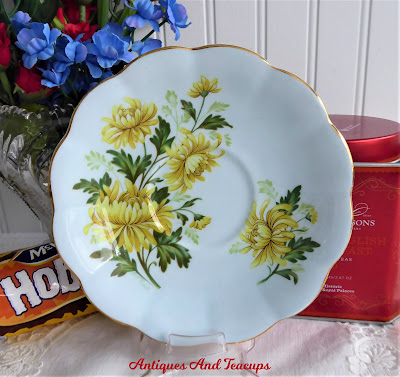 The pretty teacup was made by Royal Standard, England in the 1950s. Royal Standard was a trademark of Chapman's, Longton Staffordshire in 1916... and was a division of Thomas C. Wild which gave us Royal Albert. 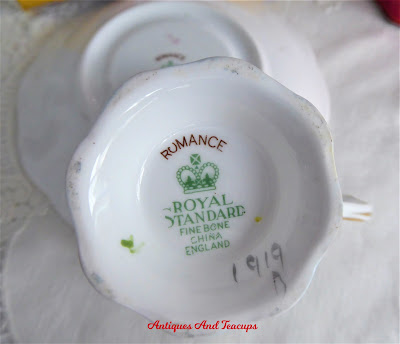 Royal Standard was closed in 1966... during that horrible time when most of the famous potteries were bought up by conglomerates or closed.
Their workmanship was extremely good, and I still look upon them as one of my favorite potteries. 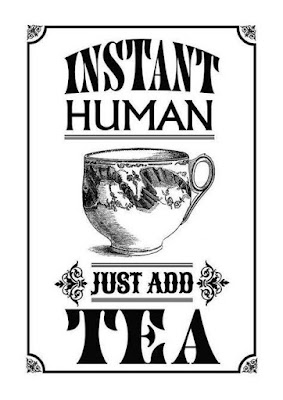 Have a lovely week, and lots of tea! Probably iced around here as well as hot... off to make some Harney's Tropical Green as iced tea!
Posted by Antiques And Teacups at 8:32 AM