Hi there! I am joining the blog parties today at the bottom of the post for Teacup Thursday. But as there is so much still to share about the Diamond Jubilee that's still the focus. 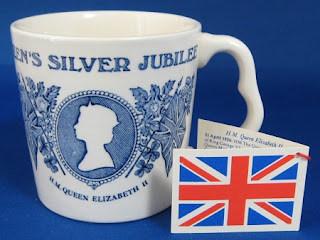 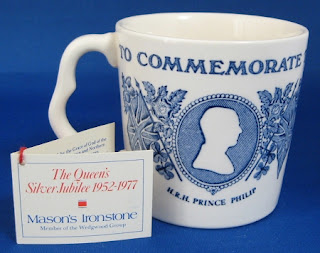 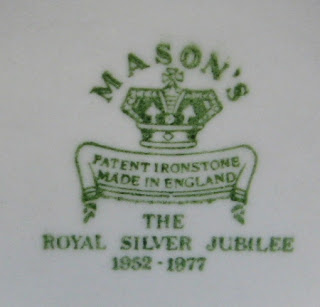 This is a blue transferware ironstone mug made by Mason's, England in 1977 for Queen Elizabeth's Diamond Jubilee, where this Diamond Jubilee was for 60 years on the throne! 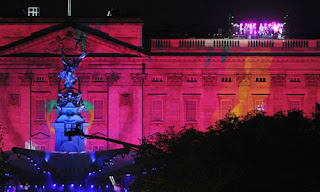 The Diamond Jubilee Concert outside of Buckingham Palace aroung the Victoria memorial was the highlight to many. But not many people know that there was a pre-concert picnic for 10,000 in the actual Palace grounds where the annual garden parties are held. A drawing was made for tickets to this carered picnic before the concert. 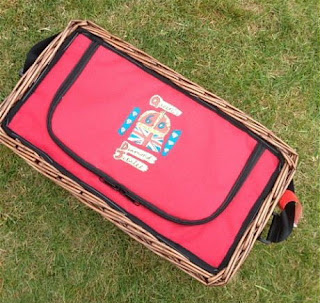 The 10,000 lucky ticket holders were given this basket and insulated hamper by Heston Blumenthal and Royal Chef Mark Flanagan and the British food shop Waitrose collaborated to produce traditional favorites with a contemporary twist. The Blumenthal touch British picnic classics were just tweaked a bit. Every item comes from a British source and all are “based on iconic dishes, with a contemporary twist”, according to Mr Flanagan.

Heston has thrown tikka masala spices and peppery nigella seeds into the pot of coronation chicken. Poached Scottish salmon is mixed with Lapsang Souchong tea-smoked salmon, crème fraîche and chives in a deliciously creamy dish, and the chef has sprinkled popping candy and aniseed over the delectable Chocolate Indulgence and Lemon Madeira cakes, which is the only sign of the sometimes astonishing things he does with his food. He definitely is one who plays with his food!  My mouth is watering just thinking about it! They were serenaded throught the picnic by a steel band and digeridoo band as well! 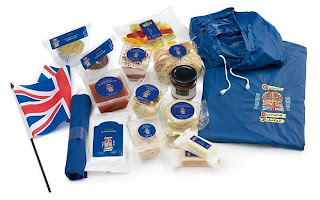 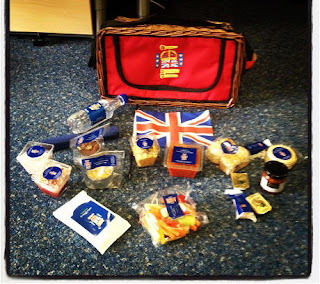 These last photos were sent to me by a friend who won a ticket!  Not the best photos but you get the idea. The top is from a Waitrose press release I found 2 months ago that has disappeared. 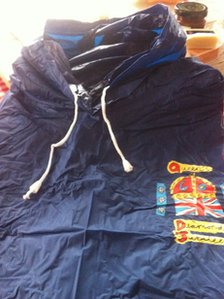 Included in the packet was an important addition...this IS England in June...a rain poncho with the Diamond Jubilee official emblem.


A truly wonderful time was had by all. For more info on the mug or other commemorative items at Antiques And Teacups, click on the photos. And our DIAMOND 15% off sale for orders over $50.00 has been extended until June 30th to honour the Queen's Diamond Jubilee! 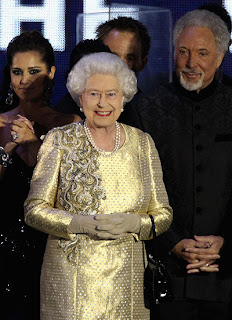 Here is the list of Thursday blog parties I am joining, and then is a link to the BBC video I found of the Queen in her gorgeous gold dress using the large brilliant cut diamond shaped crystal to launch the beacon and fireworks at the end of the Diamond Jubilee concert. Enjoy!

Posted by Antiques And Teacups at 9:22 PM