Hi and happy Teacup Tuesday! I am joining the blogs below for a wonderful time of teacup mania! I just LOVE teacups! I'm a bit late today...catching up on everything that did'nt get done during the Royal Wedding last week. But that was a great interlude...especially for Brits. We had the Union Jack out all weekend during the day. Very fun! Bet it saw a jump in the sales of tea and biscuits!

Today I am sharing 2 teacups related to William Shakespeare because...lost during Prince William and Catherine's wedding was Shakespeare's birthday and the anniversary of the Royal Shakespeare Company Theater in Stratford, England. Shakespeare's birthday is traditionally April 21st ---which incidentally is Queen Elizabeth II's real birthday, although it is celebrated in June---and the Royal Shakespeare Theatre Company celebrated it last weekend with lots of activities. I had planned to blog about it then, but the wedding kinda took up a lot of time. 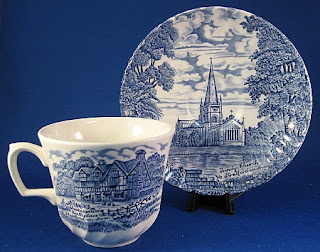 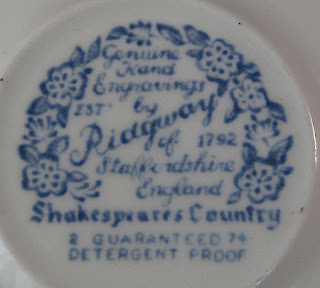 This is a Ridgway, England blue transferware design from the 1940s called Shakespeare's Country. An area we know well. My husband was born about 12 miles from Stratford-on-Avon and it is the main route (if you avoid the motorways, which we do) to get from London through the Cotswolds to the Midlands where family lives. The church is Holy Trinity Church where Shakespeare is buried. 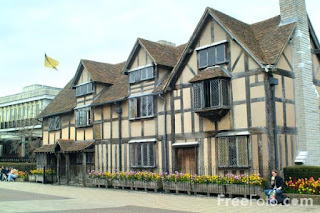 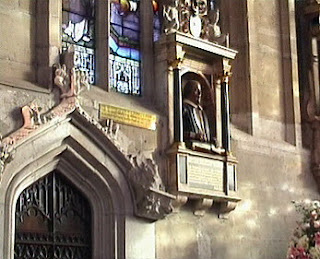 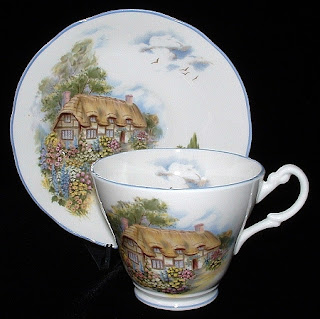 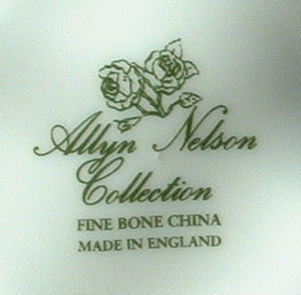 This is a favorite design from 2003 by Allyn Nelson which was a part of Royal Patrician in a design they called Anne Hathaway's Cottage. Roal Patrician closed in 2009.  Anne Hathaway was Shakespeare's sweetheart and her cottage is is short walk along the Avon from Shakespeare's birthplace and the church. Don't you just love the thatched roof? 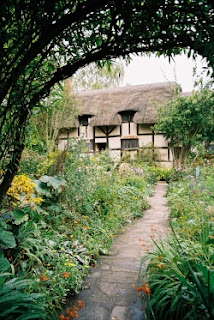 Stratford is a great place to visit. The RSC (Royal Shakespeare Company) has fabulous productions. The pubs and restaurants along the Avon are lovely. Just don't go during a Bank Holiday weekend. Chaos. At the best of times, the humpback bridge over the Avon is a major bottleneck if traffic is heavy as it is the main non-motorway route through the Cotswolds from London to the Midlands. We are always glad when we've gotten through without losing too much time if we are just in transit.
To see more info on either of the cups and saucers at Antiques And Teacups, just click on the photos.
We still have a few William and Kate Royal Wedding mugs left. Click on the mug photos on the sidebar to purchase.
Posted by Antiques And Teacups at 8:33 AM