Battenburg Cake for Tea Even On A Cruise Ship!

Hello and so glad you stopped by for a cup of tea! 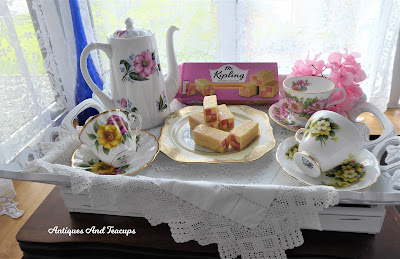 Get ready to drool... because I am!  Recently I got an order from our favorite online British shop and it included one of my favorite teatime treats... Battenberg Cake. We always order it if they have it... a checkerboard cake with jam internal mortar wrapped in marzipan... and I LOVE marzipan!
But more of that in a bit! 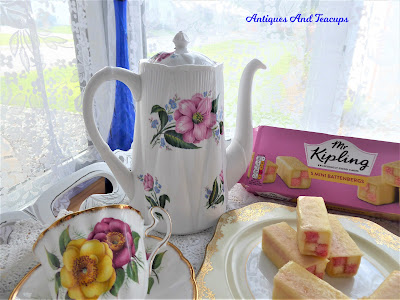 We opened our last package on Friday... sniff, sniff, so I put together a Battenberg tea time on my tray in the sunroom from things I had on hand....

The coffeepot is a Shelley Dainty shape I have with pink flowers, and because the box and Battenberg cakes are pink and yellow I stuck with that... 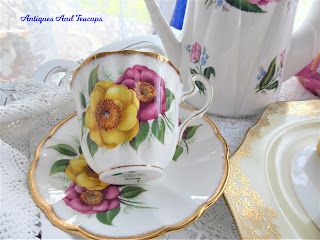 I have a pretty pink and yellow Camellia teacup by Adderley... but it sold before I could take any other photos for the tea! 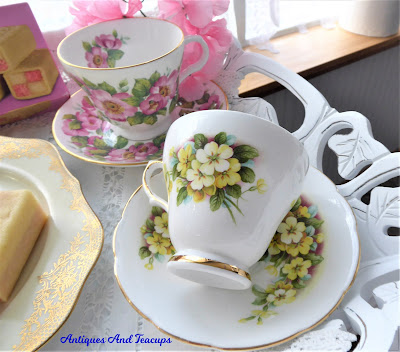 I also found a pretty teacup with a pattern of yellow Primroses and pink accents... 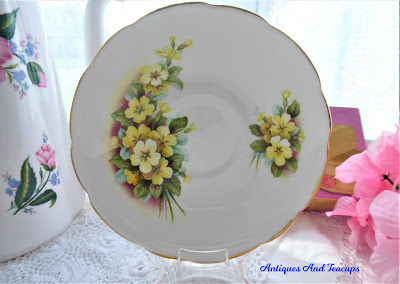 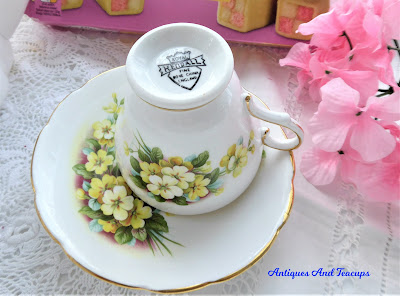 This teacup was made by a small independent pottery in Stoke called Royal Kendall. The pottery disappeared... or was swallowed up by another... by the 1970s. 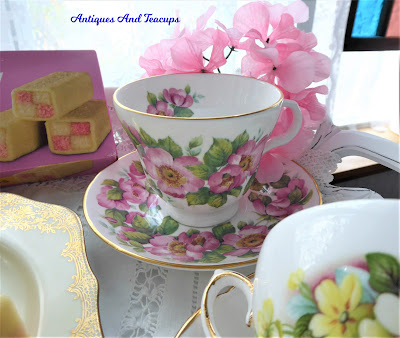 The last of the 3 teacups was made by Crown Trent, England in the 1980s. 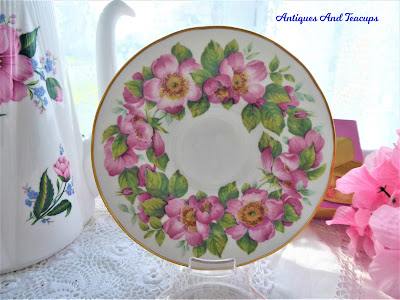 Keeping with my pink theme, it has pink wild Roses with yellow centers and is very pretty! 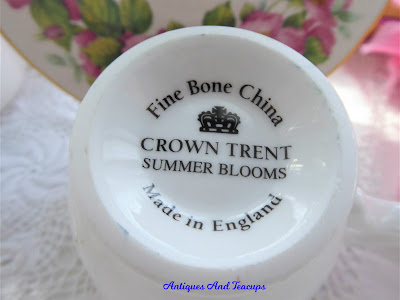 The pattern is called Summer Blooms, which certainly fits! 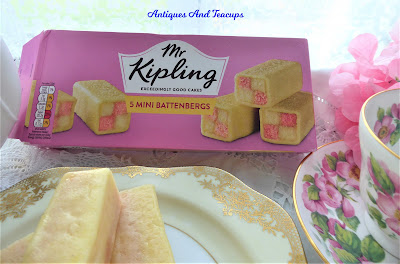 Here is the package of Battenberg mini cakes we get from Mr. Kipling which is a quite good English bakery company. 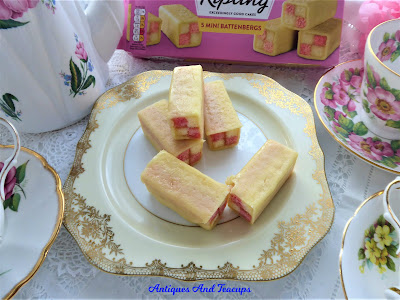 The cakes are a real teatime treat! I have put them on my  vintage Noritake Revenna plate inherited from family... 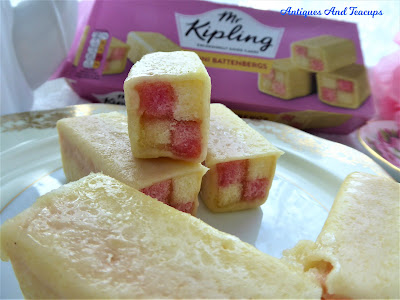 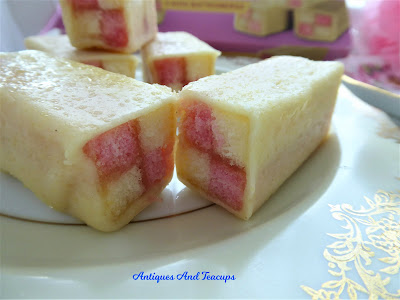 The marzipan covers the cake, and is delicious!

Our annual break was on a Holland America 2 week Alaska cruise, and Holland America serves afternoon tea every day at 3. Some days they serve it by bringing around platters of sandwiches, scones, jam and cream and desserts tray by tray... 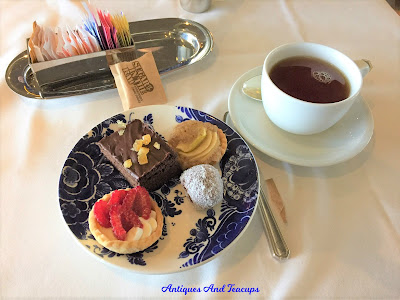 And some days, begun this year across the fleet, they serve tea on 3 tiered servers.... 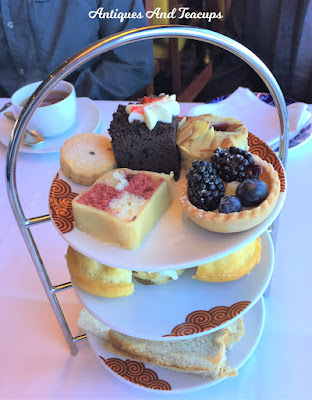 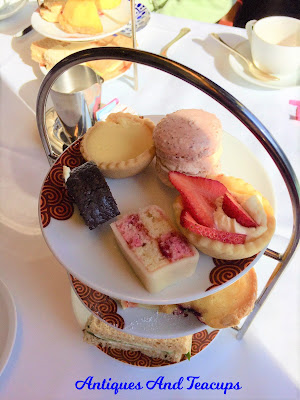 And look what they had several days on the tiers! Battenberg cake! Not everyday, but so glad when it was on the menu. My table companions had usually never heard of it. Some days they also had macarons which were also unfamiliar to most folks... but not to us! 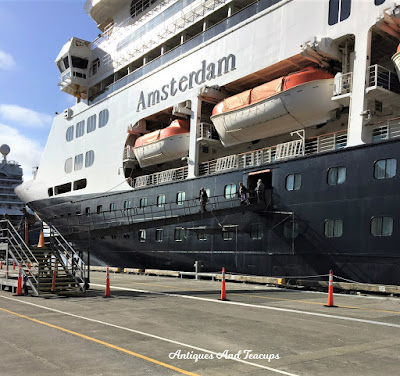 So, here's to afternoon tea on a cruise ship!

Oh, and we met some new friends! 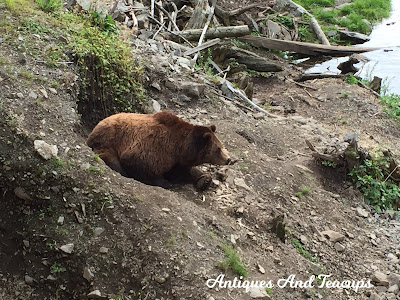 Bears and zillions of salmon in the rivers in all ports... you have to look closely... in Sitka... 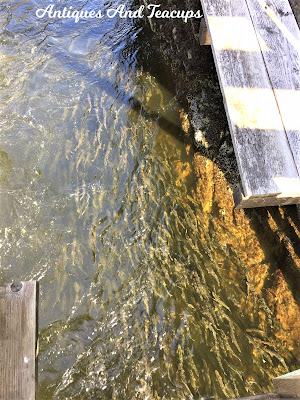 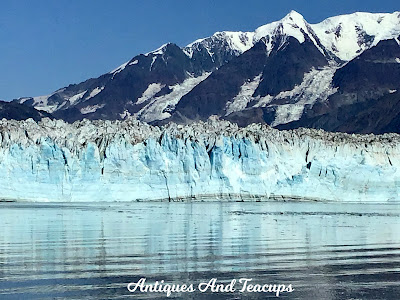 And of course, several glaciers. This id the Endicott Glacier. We went to 3 others during our cruise... we do so love Alaska! 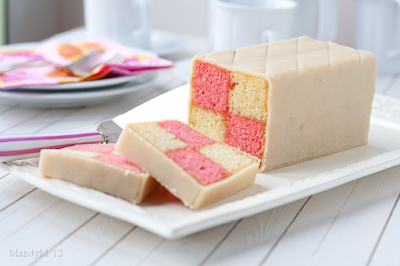 I found this recipe of Battenberg cake if you want to make it... Although I love it, I confess I don't make it anymore. I sued to when I was younger with a recipe passed down from my English Nan.  But too fiddly now, and my time is limited for fancy cooking, so... it's cruise ships or Mr. Kipling cakes for me!

Battenberg cake by The Hairy Bikers (BBC Good Food)
Battenberg cake is a true classic for afternoon tea. The cake was purportedly named in honour of the marriage of Princess Victoria, a granddaughter of Queen Victoria, to Prince Louis of Battenberg in 1884. The name refers to the town of Battenberg, Hesse in central Germany and is the seat of the aristocratic family known in Britain as Mountbatten. The earliest recipes for Battenburg Cake called for nine squares and not the four that is found in modern versions.
Ingredients
For the cake
175g/6oz softened butter, plus extra for greasing
175g/6oz golden caster sugar
3 free-range eggs
175g/6oz self-raising flour
½ tsp vanilla extract
red food colouring paste
For the covering
6 tbsp apricot jam
500g/1lb 2oz ready-made marzipan
2–3 tbsp icing sugar, for rolling.
Method
Preheat the oven to 190C/375F/Gas 5.
Grease a 20cm/8in square, loose-based cake tin with butter.
Take a 30cm x 20cm/12in x 8in strip of baking parchment and make a 8cm/3in fold in the centre. This will create a division in the cake so that the two differently coloured sponges can be cooked at the same time.
Line the tin with the baking parchment, keeping the division in the centre.
Put the butter, sugar, eggs, flour and vanilla in a food processor and pulse until well combined.
Transfer the batter to a bowl set on scales, remove half of the batter and put it in a different bowl.
Add a small dab of red food colouring to one bowl and fold it into the batter until it is well blended.
Spoon the cake batters into each side of the prepared tin and smooth the surface with the back of a spoon.
Bake in the centre of the oven for about 25 minutes, or until the sponges have risen. Cool in the tin for five minutes, then slide a knife around the outside of each sponge and turn them out onto a wire rack. If the sponges have risen unevenly, press the surface gently until level. Leave until completely cold.
To assemble the cake, first place one sponge on top of the other and trim off the crusty edges so they are both the same size. Cut the sponges in half lengthways to make four long rectangles.
Warm the apricot jam in a saucepan then press through a fine sieve.
Brush the long side of one of the sponges with jam and sandwich together with a sponge of a contrasting colour. Do the same with the other two sponges.
Sandwich the two pairs of sponges together like a checker board and brush the top and sides with jam.
Place the marzipan on a surface dusted with icing sugar and roll into a rectangle of about 40cm x 20cm/16in x 10in; it should be large enough to wrap the cake completely, leaving the ends exposed, and be about 5mm/¼in thick.
Turn the cake upside down on the marzipan and brush the underside of the sponges with jam.
Wrap the marzipan around the cake, pressing it gently onto the surface of the sponges, and press the edges together to make a firm join.
Turn back over with the seam underneath, trim a thin slice off each end and place on a serving plate.

Have a lovely week and thanks for joining me!

Oh... and Antiques And Teacups has it's 15% off FALLFUN coupon sale going on now until midnight of October 13th... 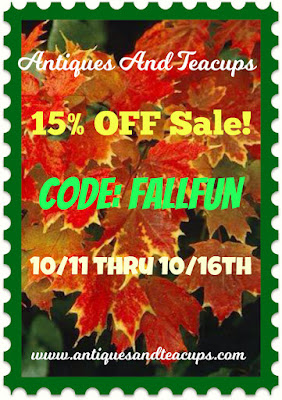