And a very Happy Valentine's Day to you all! 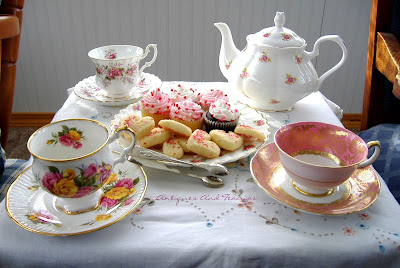 My Valentine tea today is a repeat a past post, because of the heavy snow we have dealt with. In the winter, the only room I can photo a tea in is the sunroom, because it is the only one with enough light. But for the last week until last night, there was a fear of a roof collapse with the 3 feet + of snow we had. Because we built on the sunroom by extending and enclosing a covered porch, the roof has less of a pitch and is not as strong as the rest of the house. A couple of sun porches have collapsed here, so we haven't used it for over a week.
sooo... 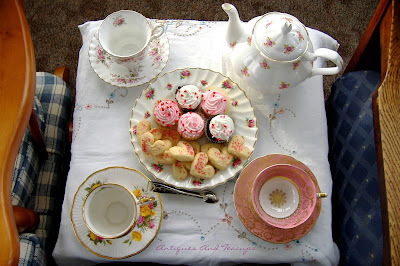 We finally found an available guy to clear the roof last night. It has been a real stressor for my husband who had always done all the maintenace until the Parkinson's Disease has worsened, and we lived in snow country and have seen a lot of roof collapses. So he has been having a difficult time until we found someone to do the job he knew needed to be done but could no longer do himself. 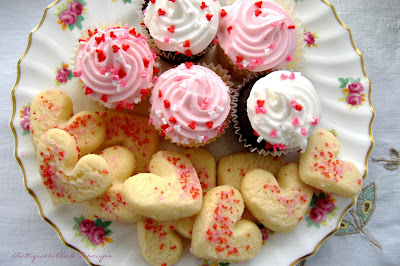 I had hoped to bake, but we have had intermottent power outages... let's hear it for the grocery store bakeries in times like that! Lol!

Valentine's Day is tomorrow, and I came across something I thought was a perfect mix of chocolate and tea that Harney & Sons tea noted. New York Chef Marcus Samuelson has a recipe on his page for Chocolate truffles with a twist... 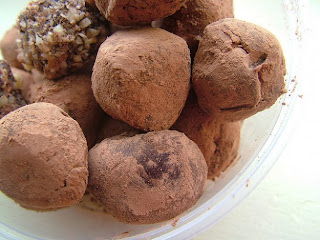 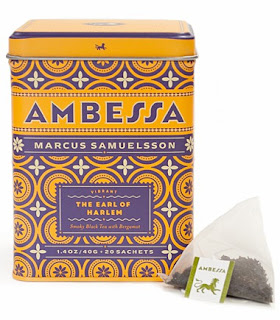 According to Harney & Sons, the tea has citrusy layers, bergamot and floral aromas with a lasting smoky base notes. Intriguing!   Chef Samuelson also gives a mini course on types of chocolate truffles...who knew??? I didn't. For me the darker chocolate the better, and that's as far as I've journeyed on that road!

1. Heat cream with Earl of Harlem tea bag and zest and until just about to simmer. Remove tea bag and zest and add vanilla.
2. While cream is heating, roughly chop the dark chocolate and place into a heat resistant metal bowl.
3. Pour hot cream over chocolate, and allow it to sit for 1-3 minutes.
4. After 1-3 minutes, stir cream and chocolate until well blended and smooth. Cover and refrigerate for at least 4 hours or overnight.
5. Place cocoa powder into a bowl. Using a teaspoon, make 1-inch scoops of cold chocolate and infused-cream mixture (ganache) and roll into balls. Then roll in cocoa powder, and refrigerate until served.
That is an awesome recipe!   Related websites to visit are:

The online magazine The Metro in the Uk did a list of the Most Romantic Spots in the UK, as well as the least, and here it is:

We have been to most on the Most Romantic list, Stratford-upon-Avon being my husband's birthplace.  I think it's funny that London is on both lists...guess it depends what part...here is my most Romantic Place....Washburne Court Hotel (although I think it changed it's name in the last 2 years) in Lower laughter in the Cotswolds... Posted by Antiques And Teacups at 9:30 AM