Hello and welcome to Tuesday Cuppa Tea...this week with a French flavor!

We have been overwhelmed by the further destruction of the Nappa/Sonoma/Santa Rosa area fire...an area we know well. Having been raised on the SF Peninsula and spent many days and hours in the area, as well as our daughter and her family having lived there for 20 years raising their kids, so visiting often.
They moved about 8 years ago, and it has been devastating to them with friends and relatives still missing and massive proerty damage. It was a bit difficult to do a tea, but our daughter thought it a good idea, so... 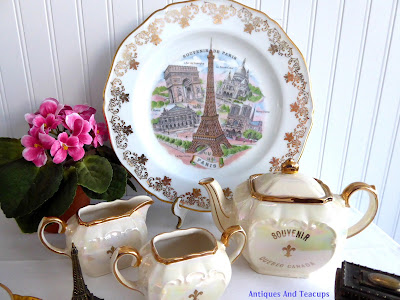 My background is a Limoges Paris France souvenir plate, showing all the famous landmarks. I have been to Paris a number of times...with my Aunt when I was 20, when we stayed for a month on the Rue Honore' in a pensione. After I married, we spent a week in Paris with a nephew, and visited several other times while in conjunction with our annual month in England.
As my husband's disease makes it impossible for him to travel that far anymore, we are so grateful for the time we spent there and the surrounding areas over the years. 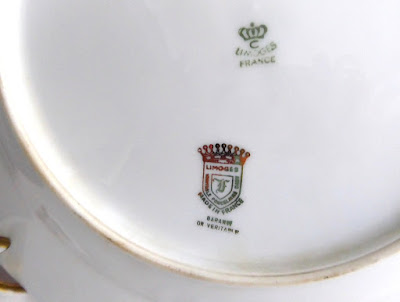 The mark is one I can't identify. Limoges is often mistaken for the maker's name, but it is actually the town/area in France that has given it's generic name to all the potteries in the area. It's like some of English china says Made In Staffordshire...but that's a large are of many potteries. Because this was made in the 1950s it has the French Government La Seynie mark guaranteeing it was made in Limoges, and that is is fine porcelain. The C and crown is a potter, but not in any of my references.... 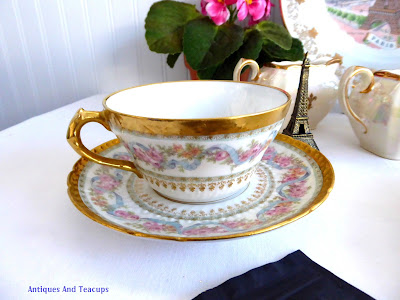 My teacup is actually a teacup trio, made between 1900-1910. It is also from Limoges, France, but has additional information in the marks.
The marks indicate the pottery is Haviland, and it is one of the most beautiful Haviland patterns I have ever had. 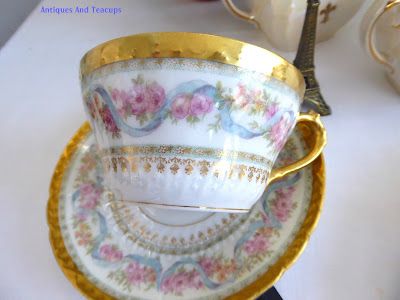 Additional marks even tell me the designers of the pattern...GDA or Gerard, Dufraissiex and Abbot. 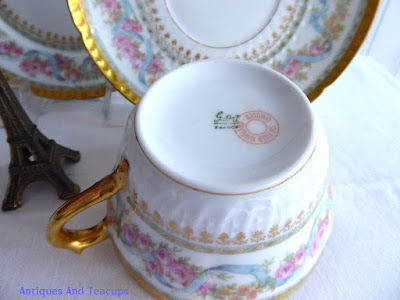 To hold our tea, we have something with a French accent, but from an English pottery made for Quebec, Canada...a Sadler Cube teapot, cream and sugar... 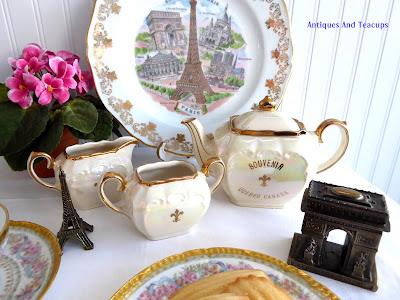 Sadler made the cube in several different sizes, from miniature to quite large. This is the 16 ounce size, so it holds 1-2 cups. 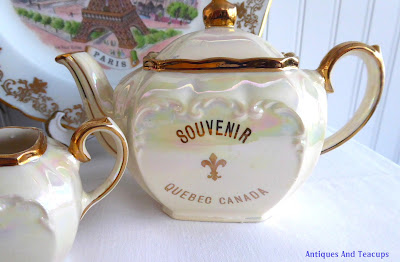 The other nice thing is it has a wonderful iridescent luster finish and comes with the matching sugar and cream too... 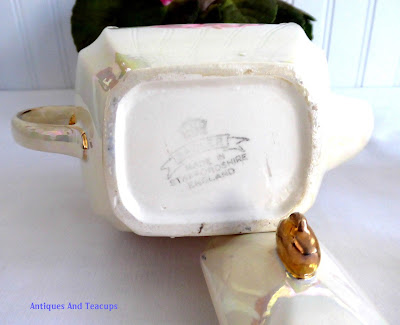 The teapot set was made in the 1950s. Sadler made a lot of souvenir items. Love them! 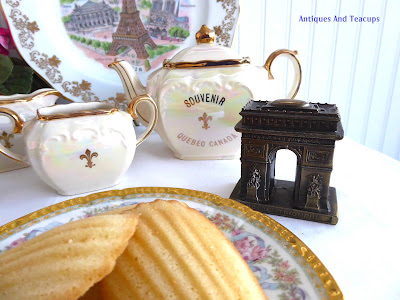 When you travel, you bring home small souvenirs...this is a miniature Arc de' Triompe I brought home... 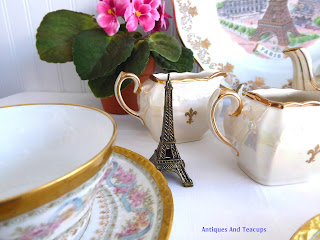 And my miniature Eiffel Tower. My aunt and I walked all the way up to the top...it was amazing...and exhauting! They off for chocolate and croissants at a sidewalk cafe' in celebration.... 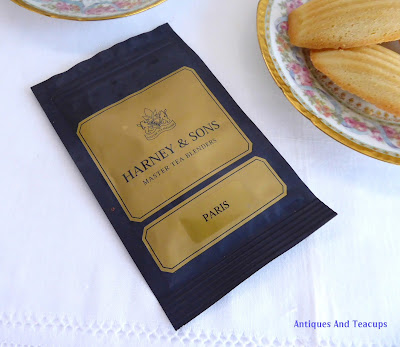 For tea we have Harney & Sons aptly named Paris. I got a sample with my last order of Tropical green tea...which describe as:

A Fruity black tea with vanilla and caramel flavors, and a hint of lemon and bergamot.
Quite nice! 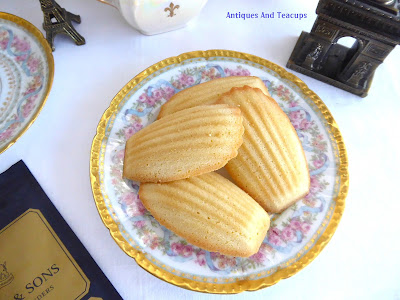 And for a French tea treat, madeleines! I have shared the recipe before, but here it is again from my post in 2016...they are so easy to mae, they appear in the cookie jar fairly frequently... 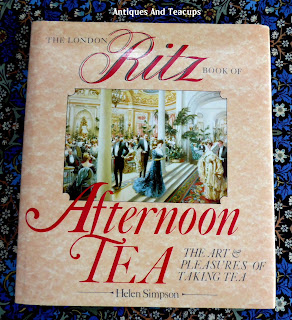 The recipe I used is from a smallish book titled The London Ritz Book Of  Afternoon Tea by Helen Simpson published in 1987...I picked it up at the Ritz as a souvenir after having tea there that year for my birthday.... 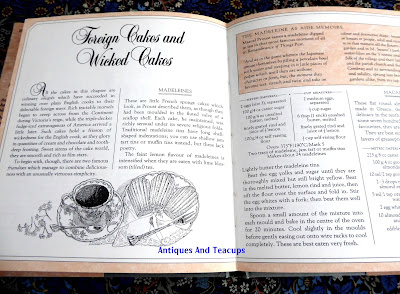 I love the chapter title of the book which includes the Madeleines recipe...Foreign Cakes And Wicked Cakes...and says:

"Such cakes hold a frisson of wickedness to the English cook, as they glory in quantities of cream and chocolate and tooth-deep frosting. Sweet sirens of the cake world, they are as smooth and rich as film stars."

Preheat oven to 375 degrees
Lightly butter 2 madeleine tins.
Beat the egg yolks and sugar until thoroughly mixed but still bright yellow. Beat in the melted butter, lemon rind and juice, then sift the flour over the surface and fold in. Stir in egg whites with a fork; then beat them well into the mixture

Spoon a small amount of the mixture into each mould and bake in the center of the oven for 20 minutes. Cool slightly in the moulds before gently easing onto wire racks to cool completely.
Makes 24 madeleines 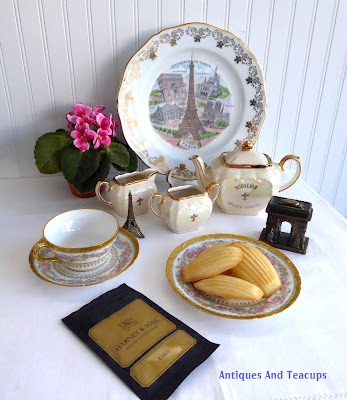 For more info on any of the china at Antiques And Teacups, click on the photos. 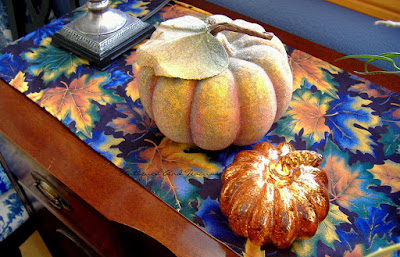 Thank you for joining me for my French flavored tea today. I hope you will join me praying for the devastation in California...and so many other places in the country...


An InLinkz Link-up
Posted by Antiques And Teacups at 4:00 AM 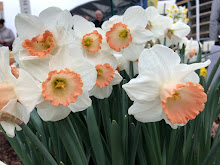 Still winter but spring is coming!