Tuesday Cuppa Tea, December Things, A Bit About Me, Giveaway 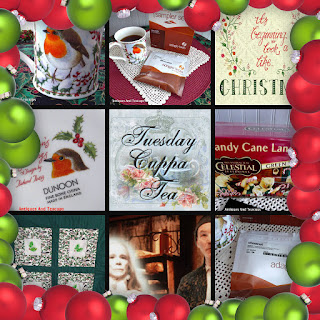 Hello and welcome to another December edition of Tuesday Cuppa Tea! After another stormy week, often out of power, today brought cloudy skies instead of the 4 inches of rain, no wind instead of the gales and the sound of chainsaws removing downed trees and broken branches.  Hope it was better in your area! Wishing my Jewish friends Happy Hanukkah...and also.. 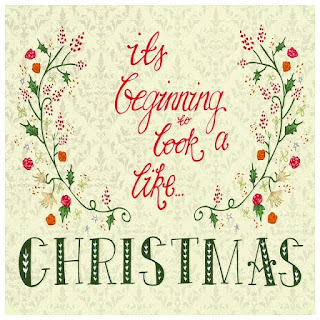 And it is fast approaching!  This week my tea is a simple one with many thanks to Nora of Teacup Tales wonderful blog, because I won her drawing for holiday teas!!!!  I was so excited because I hadn't had any of Adagio Teas holiday flavors. It came today, so I decided to share that, and save my other post to next week! 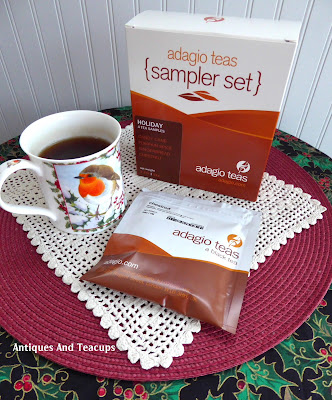 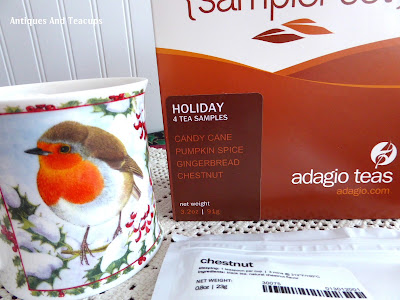 Because I only received it today, I haven't had a chance to taste all the varieties, but started with a cup of their Chestnut flavor. The teas are all loose leaf black ties with natural flavors, and the Chestnut smelled wonderful! It makes a very nice cup, with only a small amount of sugar needed...but then I always take sugar, and much to the horror of all my English family...never take milk. I guess that's because I have always had a respiratory milk allergy, but.... 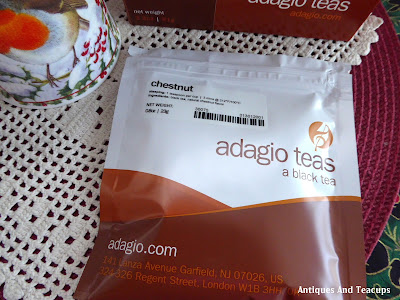 Each of the 4 flavors come in a zip lock resealable pouch which is nice. The flavors are:

Isn't that a great selection? Thanks so much Nora! I know you have seen this cup before...a favorite of mine! A Dunoon, England mug designed by Richard Partis in a 3 mug series called Season's Greetings. He's a cheeky little chappie indeed! 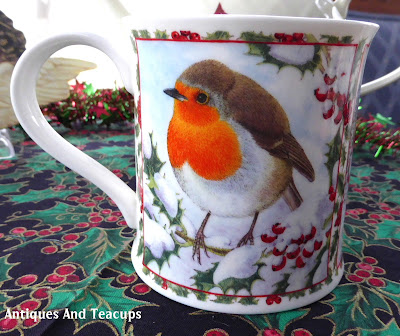 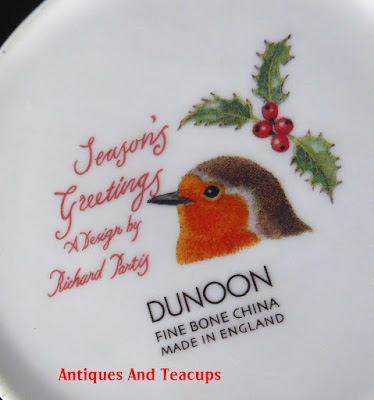 We have had lovely and festive evenings watching favorite Christmas DVDs as the count to Christmas narrows, as soon as we were sure the power would stay on. We watched Patrick Stewart's version of  Charles Dicken's A Christmas Carol last night. I think it is one of the best versions. 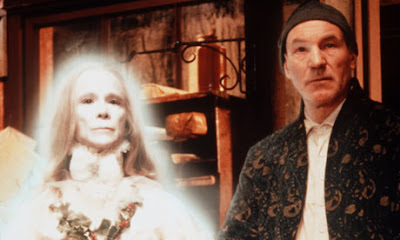 What else I think is fun is that Joel Grey is the Ghost of Christmas Past. And years ago when I was in my late teens and early 20s I was in the professional theater as part of the Harry Zevin theater company and did musical comedies. One of those I did was The Roar Of The Greasepaint The Smell Of The Crowd ...(this is the original West End London cast record album cover)... 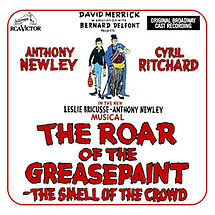 by Anthony Newly with Cyril Ritchard and Joel Grey who starred in the traveling company. Joel Grey played Cocky, a sort of Everyman, and Cyril Ritchard was Sir....I was an urchin....or, the chorus really. 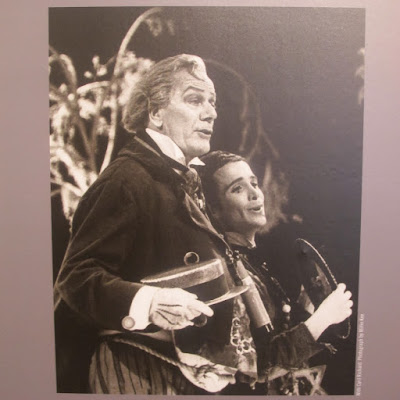 Anyway, every time I see the movie I think about the suppers the cast had after the shows at Theater-In-The-Round Circle Star theater in San Carlos...which was torn down for condos, Melodyland Theater in Anaheim with is now a church, and Carousel Theater in West Covina which I have no info on the fate of. 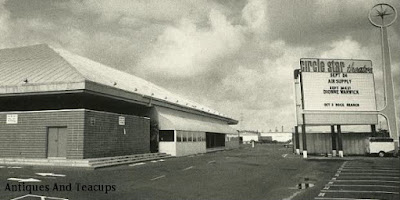 Joel Grey was one of the best I played with as being just as happy with us chorus and smaller role actors as with the leads.  This is a publicity shot from the run: 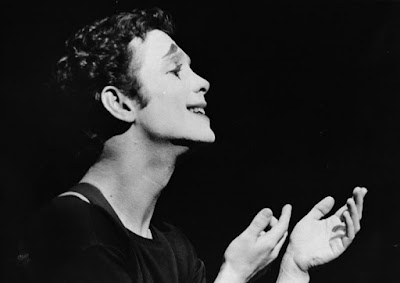 That was just before I decided theater life wasn't for me as a life long career...had to many other interests, and went off and finished my degrees in physical anthropology...and then ended up in commercial loan banking, a kindergarten teacher, pastor's wife and the musical director of a church and as an antique dealer loping along concurrently and then antique dealer taking over when my husband retired because of health problems. Life is amazing...and we have much to be thankful for! And look what I found!

I have been surprised that a song from the show has been revived..."Feeling Good"...here is a youtube version of it sung by the composer, Anthony Newly, who also performed it first on the West End in London with Cyril Ritchard when the show debuted in the 1960s...I did it with the traveling company in 1966....I am sure you will recognize it from more recent revival versions...including Nina Simone, Michael Buble' and a lot more. I heard it recently as a sort of Musak on a cruise ship! Stopped me in my tracks!

The other interesting thing was that 2 then unknown but soon-to-be-famous people were in the cast with me...Nichelle Nichols who was soon to play Uhura on Star Trek...was an urchin with me.... 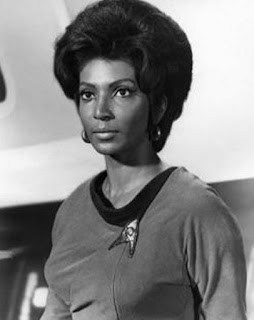 And Richard Kiel who at 7'2" played...of course...Giant, and is probably best known for playing Jaws in a Bond movie...which I never saw...amazing trip down memory lane... 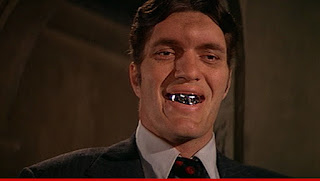 He was the sweetest, quietest most polite guy....met and worked with lots of other celebrities, but that's enough non tea related stuff!

There are so many wonderful Christmas bazaars and faires around, and I love to go to as many as I can, although I don't always buy anything. I did buy this small 3 foot by 3  foot quilted wall hanging this last weekend..it has a darling black capped chicadee design with hand printed squares with holly berries of beads. Perfect for a wall in the sunroom...isn't it cute? 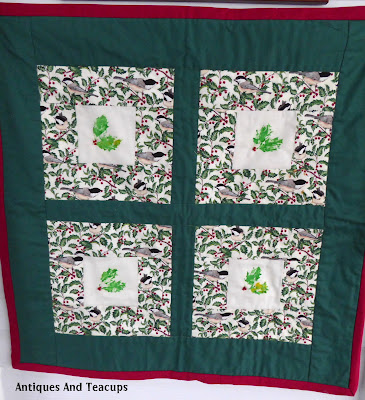 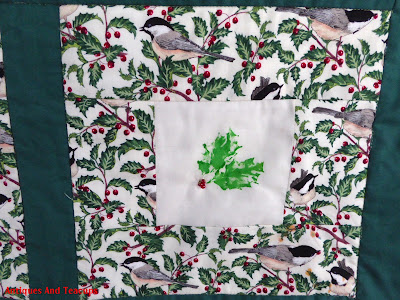 So...that's it for a very mixed bag for a December! 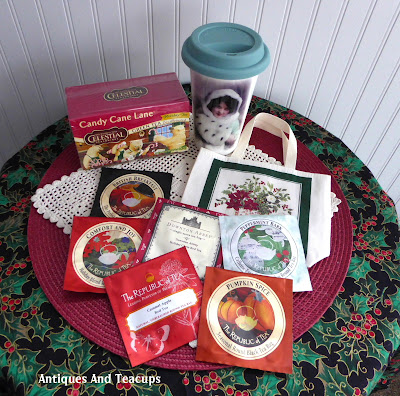 And...please click HERE to enter my quick draw Christmas Tea Giveaway...for US residents...drawing on Wednesday, Dec. 16th so maybe it can reach you for Christmas!

I hope you have a joy filled week preparing for Christmas, and are filled with thankfulness for what we have, not what we don't! We are so blessed! May this be a season of your sharing love, hope, peace and joy! 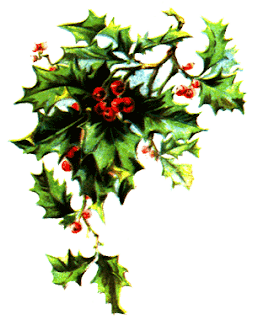 Below is the list of some of the blog parties I will be part of and there is the linky for your tea related posts...please remember that it is SSSLLLOOOOOOWWWW but if you are patient...it's there! And I love to read your comments, and can find you to visit!
Mosaic Monday
No Place Like Home
Tea Cup Tuesday
Bernideen’s Teatime, Cottage and Garden

An InLinkz Link-up
Posted by Antiques And Teacups at 5:00 PM