Good morning and welcome to Tuesday Cuppa Tea! I have been looking forward to being with all my dear blogging friends! A bit of unexpected company...joyfully received...delayed the posting...

Tea makes you feel wiser, braver and more optimistic after drinking it.
By George Orwell, A Nice Cup Of Tea

I really felt, after reading that, it was apropos to the post today...you'll see why....My teacup today is a gorgeous mulberry luster teacup in a sailing ship design that was made by Gray's Pottery, England in the 1934-1961. The ship on the cup isn't identified, but I take it to be another tea clipper...like the one I shared recently HERE.  But I couldn't resist another ship themed teacup....you'll see why.... 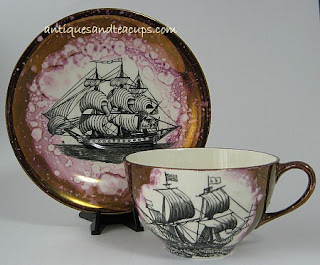 Grays Pottery was pretty short lived, from only 1934-1961, and developed by A. E. Gray, who had been a china decorator at Royal Worcester. Many of the wares the pottery made hearkened back to earlier techniques and times. The luster decoration...can you see the sheen of the copper luster on the saucer? was a popular design feature in the 18th to mid 19th century in England, with copper luster being especially popular, although silver and gold luster were also used. 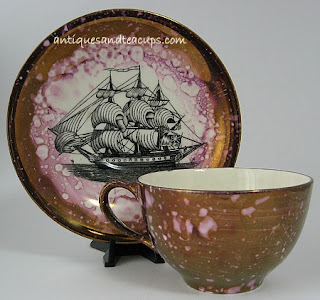 The color mulberry was one of the least popular transferware colors used, but one of my favorites, and the spatter pattern used on this cup and saucer are like water color, which I find very pleasing. 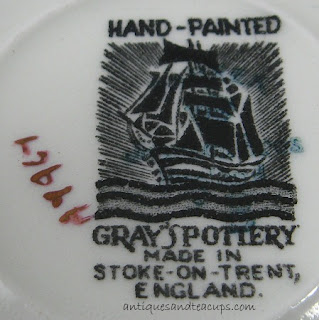 I also think it's interesting that the body, or blank, as it's called of the cup and saucer, looks to have been bought from another company and then decorated and marked by Grays. Can you see the faint blue marks under the black on the mark? That does happen. I always hope I can decipher the under mark...to see where the china came from. I can figure this one out. Many companies sold blanks, in fact all the French potteries in Limoges, France were famous for that, and you will find many pieces with 2 marks...one for the actual manufacturer of the item, and a second mark for the pottery who decorated it! Makes a kind of forensic china-pology!  For more info on this teacup at Antiques And Teacups, click on the photos.

And now...I thought a lot about being brave last week...hence the George Orwell tea quote above, as we had 2 wooden tall ships visit our waters. They actually come every year, sometimes with others. But last week it was the Lady Washington, official state Tall Ship...we are coastal after all! And her often companion the Hawaiian Chieftan. 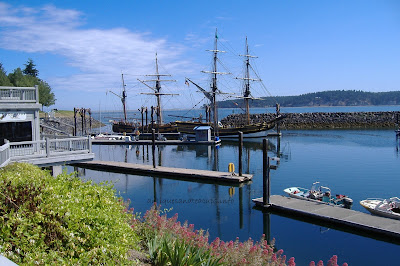 Being a lover of cruises, I am always astounded by the way brave sailors in these tiny wooden corks, discovered the world and plied the great oceans transporting goods like tea. Amazing! They were made of sterner stuff than I...I NEVER could! I like my ships about 950 feet long, and these are 65 and 93 feet long, with 89 foot masts. You have actually probably seen these ships already and didn't know it! 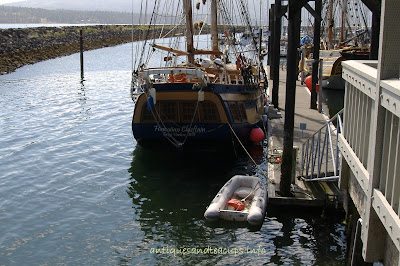 This is the stern of the Hawaiian Chieftain...you can see how small in relation to the dinghy... 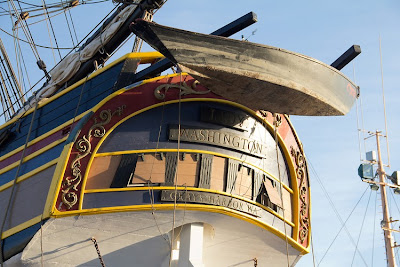 The stern of the Lady Washington. The ships have appeared as the HMS Interceptor in Pirates Of The Carribean, the USS Enterprise in Star Trek Generations and recently in the music video "Can't Hold Us" by Macklemore & Ryan Lewis, to name a few. 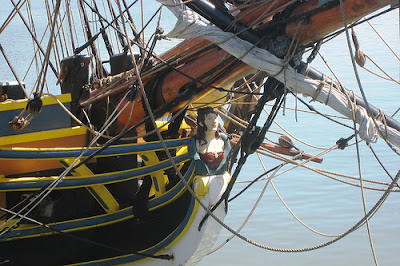 This is Nettie, figurehead of the Lady Washington.  We arrived early in the day...don't like crowds...but tours were given later, and there was a mock sea battle between the two later in the afternoon. You really can see how brave you had to be to be an explorer or seaman in the early days when you see how small these ships were. Brings a whole new appreciation of our early ancestors! I have had 25 ft seas in a large ship that was daunting...can't imagine that in one of these!

So if you have a chance ever to see the tall ships in a port nearby...go! We have been to a tall ships festival in Vancouver, BC harbor with about 50. Fabulous experience!

So thanks for visiting me here at Tuesday Cuppa Tea! I am still trying to get the blog tweaked since the piracy...apropos word to use today...and please have patience! If the linky or comments don't work at first or immediately, please click on the blog post title first, then try again...that sometimes helps.

Next week  am joining with Sandi of Rose Chintz with her Christmas In July Tea Party on July 22, so see you there... 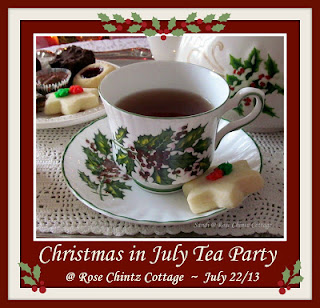 Here is a list of other blogs and the linky. I love to hear from you, and thanks so much for all the wonderful comments and emails! Have a great week! It's the pre Sequim Lavender Festival week here, so lots going on! Cool!


Home On Wednesday
Posted by Antiques And Teacups at 8:41 AM